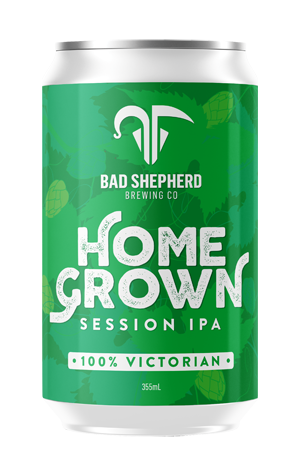 Cheltenham brewery Bad Shepherd have enjoyed success – not to mention plenty of coverage – with their Victorian Pale Ale, a beer that helped bring the reawakened Melbourne ale yeast back to prominence in a celebration of all Aussie ingredients. It's a formula they've returned to as their IPA Series starts up again in 2021.

With Homegrown, it's a case once more of all Victorian ingredients, this time including the recently-named Eclipse hops (formerly HPA-016) from Hop Products Australia. Set to work alongside the aforementioned, once-forgotten yeast, the 4 percent ABV beer delivers a more pronounced, drier, old school bitterness and, while the hop’s vaunted citrus is there, it's more subtle than explosive, while any sweetness from the malts contributing to the copper hue is also kept in check. Imagine a traditional Aussie bitter given a lick of New World hopping and you’re on the Home straight.