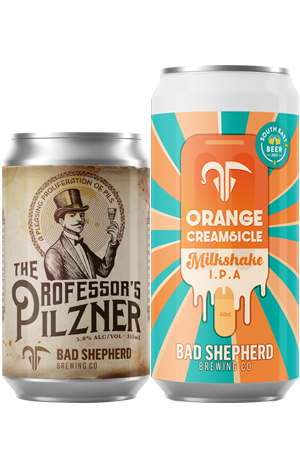 If you're going to make a pilsner with a man who's gone by the nom de plume Professor Pilsner for well over a decade, you're not going to muck about with centuries of tradition, are you? And that's the case with Bad Shepherd's collab with Pete Mitcham, released for their joint Good Beer Week 2021 event focused on, you've got it, pilsners.

The Professor's Pilzner is inspired by the softer Germany examples and, while the label says it's been brewed with modern day hops, it remains firmly planted in the old school, as hinted at by the medicine man-inspired label with a touch of the faded treasure map about it. Aromas of freshly cut grass in the summer sun mix with soft, doughy malts, a waft of sulphur, and a gentle bitterness in a beer far simpler than most limited releases to come from the Cheltenham brewery in recent times.

Orange Creamsicle is a milkshake IPA brewed for another of their GBW events, South East Beer, one we're told was dry-hopped every day of fermentation with a selection of citrusy hops: Riwaka, Huell Melon, Pacifica, Galaxy and Citra. It looks like creamy fruit juice, or even a creamsicle melted into a glass, and is sticky and dank on the nose as much as it is orangey. Many oat cream IPAs have been getting lighter on the lactose over the past year, but this one embraces the viscosity with lashings of vanilla and lactose, although a bit of boozy prickle still pokes through. When you check the label and see it's 10 percent ABV, that's hardly surprising.