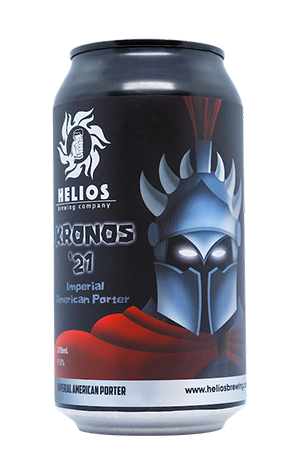 Once again, Kronos proves himself worthy of the title king of the Titans - a godkiller of a brew that somehow takes an intense pantheon of flavours and beats them into submission for his own glory. After 2018’s big breakfast stout, 2019’s Belgian strong dark ale and 2020’s imperial nitro coffee stout, 2021’s Kronos is an imperial American porter that takes huge hop presence in one hand and malty brute strength in the other.

If you received this beer while you were blindfolded, the first sniff would quite likely make you place this beer in the same category as many other Helios IPAs. A dry-hopping of Chinook, Centennial and Loral offers up an aromatic profile of zingy lemon icing on a more mellow carrot cake alongside a bouquet of fresh flowers. When you also pick up the pine and the malt caramel that shoulders its way to the front, you’ll know you’re drinking a Charlie Hodgson signature IPA, and in fact this beer shares a large portion of its recipe with Helios’ Cyclops IPA.

Which makes it all the more interesting when you look at this beer. It’s dark. It’s very dark. If it weren’t for the hint of reddy-brown that creeps in at the edges when you hold it up to the light, you might call it black.

But when you finally get past your bafflement and start to sip, you’re introduced to the rest of the beer. Here there's a rich dark caramel with just a coating of chocolate, like a tube of Rolo, with sweet biscuit and thick bitterness of the dark malts that's followed by molasses, which lays a firm foundation for the hoppy orange and pine characters to keep playing on. The bitterness of the hops is balanced by the smooth and velvety texture like a cloak billowing in the breeze and the more you drink - or perhaps it’s the closer the beer creeps towards room temperature - the more the aroma transforms into one of golden syrup, with the hops fading into the background.

Kronos, you sly beast. You’ve earned yourself another year at the top of the Olympian food chain.