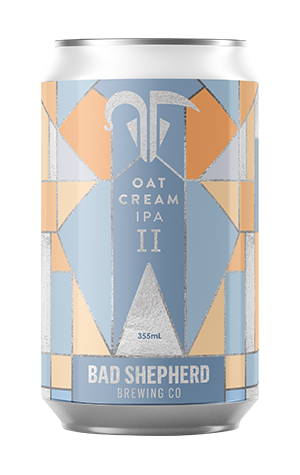 Only a couple of months on from their exploration of oats, lactose and Pahto, Talus, Cashmere and Galaxy hops, Bad Shepherd have brewed a sequel to that beer to bring us Oat Cream IPA II. After brewing that first instalment of Oat Cream IPA, the Melbourne brewery were particularly happy with how it let them showcase different hop varieties and particular nuances in each hop so for this beer, they've brewed with two types they’d never before used, Sequoia and Meridian. Those two haven’t been common on these pages either but both hail from America with Sequoia known for mango and pineapple, citrus and pine while Meridian can bring its own tropical notes, berry, and citrus and even a little spearmint.

Fortunately for someone who doesn't like spearmint, there didn’t seem to be any of that in the soft, incredibly creamy beer. Instead, that smooth base lets the hop flavours of pineapple, mango, berry and pine all shine against an, only slightly, sweet backdrop which in turn is balanced by a soft bitterness. Overall it means Oat Cream IPA II is as big a success as Oat Cream IPA I and we wait we anticipation to see if this will become a trilogy, or better yet, a saga.