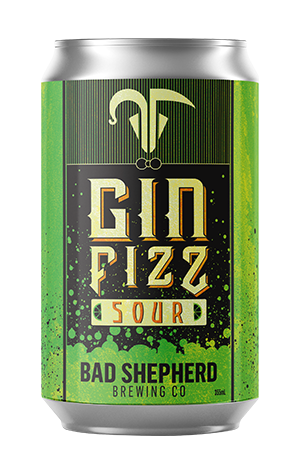 It goes without saying, there’s plenty of negatives to be found in 2021 turning out to be rather too much like 2020 for many Victorians. But for some there will be a certain comfort to be found in seeing a beer series return for another summer. In Bad Shepherd's case, their return to sunnier climes takes the shape of their Summer Sour Series, kicking off in September with Gin Fizz Sour.

The first release in the 2021 series is a collaboration with the distillers at That Spirited Lot – who, like the brewery, are based in Melbourne’s southeast – with this beer taking the distillery’s Ninch gin and adding ruby grapefruit, lemon and lactose to recreate a Gin Fizz cocktail.

It makes for a beer that’s quite akin to taking a sip of Sprite first up, before citrus and fresh pine needles make an appearance. At first, I’d assumed that was thanks to the hops, considering such characteristics are key elements in Ninch, they could just as well be coming from there. Throw in juniper, coriander and a blend of botanicals, plus a high level of carbonation and a puckering sourness, and you have a beer ready to greet you after a lazy afternoon by the pool.