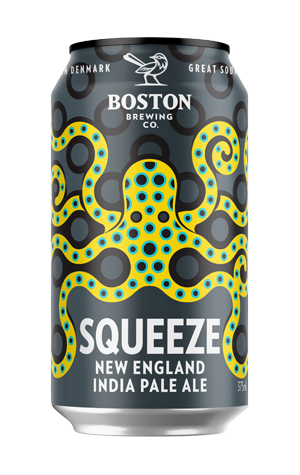 We last mentioned Boston’s Squeeze back in late 2019, when it first appeared as a limited release ready for pairinf with that summer’s radiant energy. Two years on, and having made a few more appearances as a limited release, it’s with the same positivity that Squeeze now ascends to core range, complete with blue bottle label art from Zendoke squeezing the can.

As before, Amarillo, Citra, Mosaic, Azacca and El Dorado hops feature in a welcoming tropical, citrus fog, carried by a firm-for-style bitterness which provides structure. While Squeeze has remained the brewers' favourite knock-off beer for some time, it turns out it's also expanded palates at Boston’s venues, as head brewer Luke Low explains.

“I think it’s a great transition beer for drinkers getting into more hop forward styles," he says. "Quite often you can look around the brewpub and see a diverse range of people drinking Squeeze.”

Available from the Denmark brewery