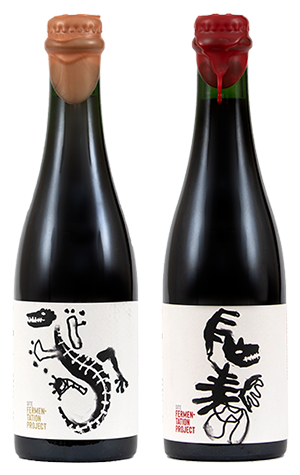 At this point, it’s safe to assume there’s no such thing as a slow moment at Hop Nation. They have homes in the Mornington Peninsula and Footscray and, alongside their regular range of beers – which welcomes new releases with some frequency – they recently started distilling, produce Ray seltzers, Site Wines, and the mixed culture-focused Site Fermentation Project.

In both character and look, the last of those is a long way from static too; the brewery has rebranded the range right at the end of 2021. The logo has been updated by Hop Nation’s longtime collaborator, Mark Gamble, and each release – coming in 375ml glass bottles and magnums – showcases artwork from Steve Leadbeater, featuring unique mutated creatures to pay homage to the unpredictable nature of brewing with barrels.

They also appear to have mastered an art that very few breweries get right: the perfect amount of wax to sit on their crown seals. OK, maybe it’s just the bottles this writer got his hands on, but the level of wax on the two opening beers is a masterclass in wax-dipping, leaving enough so the brewery could imprint FP on the top without stymieing attempts to crack into it.

Anyway, I could wax lyrical about wax all day but we best get into the beers. Kicking off with Oud Bruin Ale, it spent two years ageing with the Site house culture in 225 litre French oak barrels. The resulting beer is one that's bracingly sour, albeit balanced by an underlying and quite rich sweetness from the malt, some vanilla and a herbal layer that sits above the tart and sweet combination. Overall, it makes Oud somewhat confusing on the palate.

Joining it is Syrah Sour Red 2021, which uses spent cherries from Lapin Cherry Sour Blonde 2020 – the last beer released with the previous Site FP branding – and Syrah skins from Heathcote. It pours a stunning red colour, somewhere between blood plum and homebrand cordial that’s been mixed with a very small amount of water. You don’t have to worry about there being anything as simple as cordial about it, though, instead Syrah Sour Red provides a complex web of earthy acidity, further flavours akin to balsamic vinegar, almond slice, red wine tannins, and more fruited grape flavours.