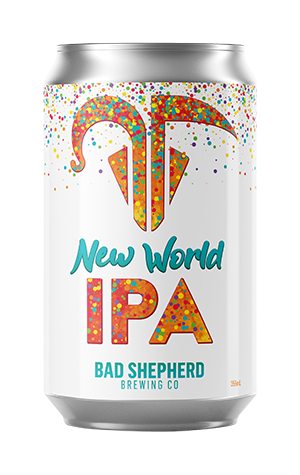 The Bad Shepherd brewpub isn’t a place where there's any shortage of experimentation, with the Cheltenham crew regularly taking their recipes to beer's outer edges, whether it's in the direction of cocktails or desserts. So when it came time to brew up a beer for their sixth birthday, you might expect something cake-inspired to mark the occasion; instead, you’ll find a classic Bad Shepherd beer that's been revamped.

(OK, so technically they served multiple beers at their street party and a few of them were cake-inspired, but it was this beer that’s been given a wider release as the official "birthday beer" so bear with me.)

That revamped beer is New World IPA, a beer we first wrote about in 2016 and which was once a regular sight in the brewery's lineup, only to disappear, leading fans to call for its return. It’s one that’s been revived in two different cans: one you’ll find in bottleshops and bars and the one you see here on the right that's only available through Bad Shepherd’s brewpub. As for the beer, the aim is for the bold West Coast IPA to be a launching pad for a collection of some of the most interesting hops out there, with the birthday beer including Idaho Gem, Azacca, Simcoe and Vic Secret.

The result is a sparkling orange beer with a mix of flavours that start at melon, bring in pineapple, zesty grapefruit and head towards a spot of strawberry and bubblegum. With some further dank or piney notes, a building bitterness and a crisp and dry finish, it's a classic IPA with a unique hop combination– you can see why people have been wishing for its return. It seems birthday wishes can come true...