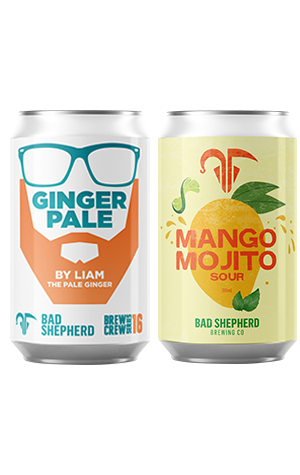 You could make an argument that as the craft beer industry has grown, marketing departments have had an increased influence over which beers brewers are allowed to make. Well, it's not a point that's in dispute with Bad Shepherd’s 16th Brew Crew release, as the beer is entirely the work of the marketing department. By that we mean the Melbourne brewery’s marketing manager anyway, with Liam leaving his desk behind to brew a beer inspired by his appearance, Ginger Pale. Even though the ginger flavour is quite distinct, it isn’t quite as overbearing as the root vegetable can be at times, with it lightly pairing with the hops - Amarillo, Centennial, Cascade to be specific - which provide orange and pine which makes Ginger Pale a very classic American pale with a twist.

We can’t attest to whether or not Bad Shepherd’s other January release was created by the marketing or the production teams but we do wonder if it was dreamt up by the beach over a summer holiday. Mango Mojito Sour is the brewery’s latest cocktail sour and it pours the same colour as a particularly ripe pieace of the tropical fruit's flesh and while the beer’s sour side is turned towards soft, it certainly does well at cocktail mimicry. In short: the mango flavour hits first, is joined by a softer edge of lime and zest while rum slowly but surely joins the party.