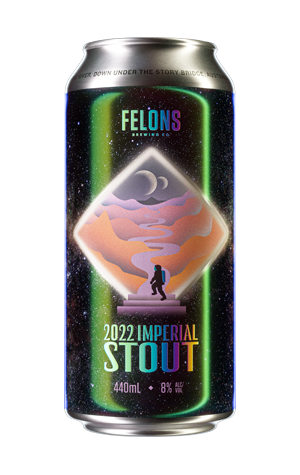 Felons have given their 2022 Imperial Stout release a real "into the void" feel ahead of its Winter Solstice launch at 7.13pm on June 21. The labels have been given both a textural, powdery Martian landscape and a gleaming, rainbow-mirror treatment (not to mention an astronaut making their way from one to the other), and there's a promo video featuring presumably the same astronaut scampering across a stormy planet to reach, you've guessed it, a giant can of imperial stout reminiscent of the monolith in 2001: A Space Odyssey.

It's an approach that tells you a few things: they're excited about its arrival (in 3,400 numbered cans); they've got a larger marketing budget than most independent brewing companies; and you should prepare yourself for something decidedly dark. Or, as brewery director Tom Champion puts it, they were on a mission "to make a rich, hedonistic brew that takes your palate to dark, yet luxuriant places."

Taking the traditional imperial stouts of the UK as their inspiration, they've employed seven specialty malts as part of that mission, and certainly achieved the decidedly dark; it pours with the sort of deeply brown head you could describe as menacing and confirms they didn’t skimp on the heavily-kilned malts. Yet first impressions on the nose are of just how fruity it is – sweet, dried fruit or a fruity coffee bean, admittedly, not the fruitiness of a hazy or a sour. Delve in and it’s like a liqueur chocolate you've left long enough on your tongue to melt into gloop: undeniably full-bodied yet possessing a velvety softness and bittersweet chocolate finish that makes the experience feel like you're enjoying a big stout rather than an imposingly imperial beast. Like a traditional English offering, then.

Despite my best efforts, I still haven't even started to get my head around black holes – I mean, soft hair in space, what's that all about? – but if they serve these at the bar on the other side, I'm in.