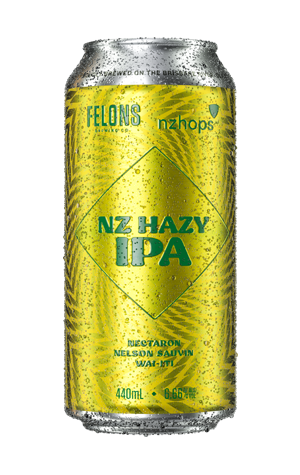 The team at NZ Hops sure is getting around these days. Ever since they put together mixed packs showcasing their flagship hops in partnership with a dozen Aussie brewers last summer, there seems to have been a never-ending stream of new releases hawking their partnerships with brewers, from the Bract Brewing Programme featuring new experimental varieties to beers like this: a hazy IPA brewed with Nectaron, Nelson Sauvin and Wai-iti.

While most hazies these days are well-suited to the term, Felons' beer sits just as well within the "turbid" days of earlier NEIPAs – it practically gloops (here misappropriated as a verb) from can into your glass courtesy of the oats, wheat and New England yeast strain. It's as quirky as it is dense in appearance too.

There's ripe pineapple aplenty, much in the way of the stonefruit characters some recent Kiwi hops are becoming known for – here delivered with a tinned fruit syrup intensity – and more besides. Namely, the more herbaceous elements that can be extracted from the neomexicanus hop varieties coming out of America, perhaps a result of the interaction of hops and yeast. Either way, there's heaps going on for sure.