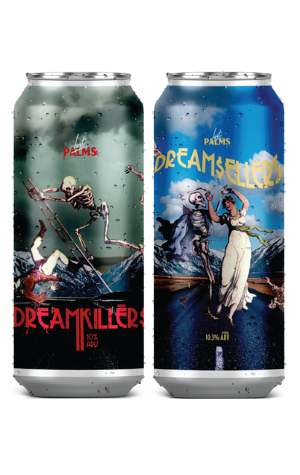 Lost Palms make a lot of fruity, beach-y beers, which is perfectly on brand for a brewery depicted by a pink palm tree. So when they embraced winter by releasing a pair of imperial stouts, my proverbial ears pricked up. (My literal ears just sat on the side of my head like they always do. They’re very placid.)

When I poured out a glass of Dreamkiller$ and saw how dense and dark the head was, I smiled. I have a theory when it comes to stouts: the darker the head, the tastier the stout will be. So the big, fat, brown marshmallow sitting atop Dreamkiller$ had me excited right away. It gave off a strong aroma of coffee, but more creamy than roasty, like the smell of a triple shot cappuccino. But when I tasted it, the flavour jumped from cappuccino to espresso: it was thick and oily on the tongue, with the mild sweetness of a perfectly pulled ristretto. There was also something nearly savoury going on: flowy soft liquorice that settled into an almost tobacco-ish finish.

Moving to Dream$ellers, we get an imperial stout dosed with additions of coffee, vanilla and cacao, as well as spiced rum and coconut rum from Dead Man’s Fingers. But my experience wasn’t a clear combination of these flavours so much as a massage of the original. The smell was sweeter, like – this may sound weird for an imperial stout, but bear with me – Allen’s Strawberries & Cream lollies. I guess that’s largely the vanilla talking, but I don’t know where the strawberry part came from. Nevertheless, a lovely aroma. Then it drank with the same thickness, but the espresso had been smoothed out (less pronounced coffee flavour in the version with a coffee addition? Intriguing!), and in its place was a gentle chocolaty wash through the mouth.