Beer Lost Palms The Way It Is, Paper Trails & Vibe (with One Drop) 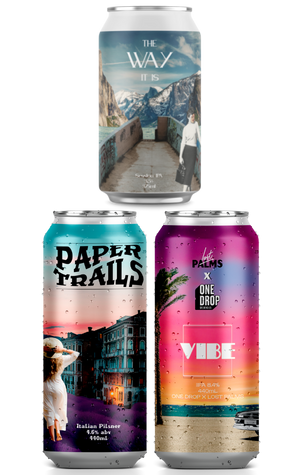 I believe it was Clark Kent’s Uncle Bob who said: ‘With great baby comes great responsibility.’

Lost Palms’ head brewer Mitch is a new father, and is feeling the weight of the above quote. So the brew team put together a session IPA that’d give him a responsible alternative to those IIPAs and IIIPAs the brewery is fond of. The Way It Is pours totally opaque, looking as much like orange juice as any hazy you’ll come across. But this is indeed a light drinker - the El Dorado and Cashmere dry hop additions provide plenty of juicy aromas while the actual drinking is dry, restrained, and gives a distinct pfzzzt on the tongue.

As for the label art - at a glance, it looks quite classical and classy, with a retro image of a woman standing in front of some snowy alps. But keep looking and you see a divine hand pouring milk into a lake and a second lady wearing a cat mask, so perhaps it’s meant to represent those crazy half-dreams you have when you’re sleep-deprived. Congratulations on your sleep deprivation, Mitch!

Divine hands show up on the label of the next beer as well, but it’s otherwise much less trippy. Paper Trails is an Italian-style pilsner awash with flavour. In Australia, pale lagers have a reputation for being low in flavour (because so many of them are) but then you get one that releases its powerful aroma into the air the moment you crack the can, and you know you’re in for a tasty treat. Thanks to the generous dry-hopping, Paper Trails tastes like someone’s slapped you around with a pillowcase full of Hallertau hops. It’s spicy and herbal and floral, with a golden-syrup-on-bread malt sweetness winding through the middle. I can recommend pairing it with your bodyweight in salted cashews.

Though perhaps you shouldn’t load up on too many snacks before drinking Vibe,* because this is a beer so weedy it’ll give you the munchies. But don’t go expecting something one-dimensional; Lost Palms and One Drop have joined forces to make a double IPA that’s equal parts fruit and marijuana. Carmen Miranda meets Mary Jane. The beer hit me first with the classic orange mango juice aromatics of many hazies, but followed that up with an unexpected tidal wave of weed. I literally went out to my balcony to check that my neighbours weren’t responsible for the sweet herbal notes flooding my nostrils and only once I was sure there was no dank drifting in the window, I returned to my beer. As I sniffed and sipped, my senses pinballed back and forth between fruit juice and weed, while sweetness and dryness and bitterness all hit at the same time. It was impressive enough that by the time I started getting an aroma of baking cookies from the beer as well, I wasn’t even surprised. I just figured I shouldn’t put LP and OD in a box, and sat back and enjoyed the ride.

And that label art! The design captures some gorgeous juxtaposition - the clash of a west coast pink sunset and a black-and-white scene of what I can only assume is some kind of gangster happening (who else is driving around in a black Merc with no number plates?). I guess the palm trees on the left are meant to represent Lost Palms, which would make One Drop the mobsters on the right. Personally, I find it all thematically confusing but aesthetically delightful.

*Fun fact: I have it on good authority (from my 16-year-old brother-in-law) that using the word ‘vibe’ automatically dates you as a Millennial. If you ever find yourself wanting to communicate with Zoomers, the closest equivalent word to use is ‘mood’.