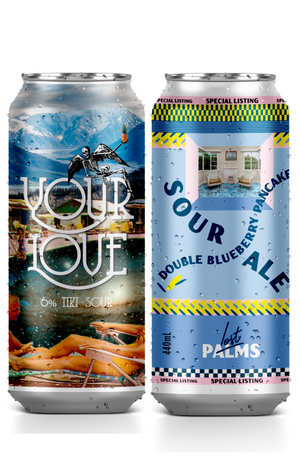 Both of these beers may be fruited and acidic, but this sour double-header features two quite different beers. Pick your favourite.

Will it be Your Love Tiki Sour? It’s been designed with a tropical cocktail in mind: a sour beer base topped with pineapple, passionfruit and orange then drizzled with coconut & lime rum from Dead Man’s Fingers. None of the ingredients dominates; each is there to contribute to the overall flavour experience.

Your Love brings a lot of tang. It’s six percent ABV but drinks like four. It’s for the pucker lovers.

In the glass it looks like pulped cherries with a candy pink head. This beer fills the air with a doughy, cakey smell like someone’s been frying a pile of poffertjes. It takes a second to realise that tied in with that sweet smell is the sweetness of maple syrup. But there’s no delay once you get your lips on it. Maple stickiness and jammy berries tumble together, each vying for your attention, but it’s clear they’re play-wrestling rather than fighting. The sourness is secondary - a reminder, a nudge - while that thick berry pancakey goodness envelops you.

So go on. Pick a winner. Or have one after breakfast and one before dinner.