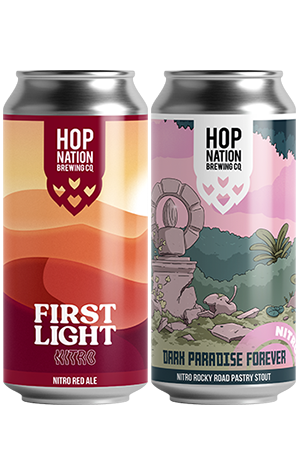 If you like you’re beer bubbles to be tiny and the drink in your glass to cascade, then Hop Nation have you covered with two nitro cans. When it comes to the red ale First Light, those little bubbles do wonders too, with the smooth and fluffy beer a fitting match for the sweet and tongue-coating mix of toffee, caramel and Turkish delight. While those elements and the colour might have you dreaming of Irish pubs, First Light also shines across the Atlantic thanks to the use of Cryo Centennial and Amarillo that bring out orange peel, white peach and a piney and bitter finish.

Also making use of those little bubbles is Dark Paradise Forever, the third in Hop Nation’s Dark Paradise pastry stout series which always reminds me of the 2008 film, Indiana Jones and the Kingdom of the Crystal Skull and lesser-known members of the same franchise. Just like the others in this beer's franchise, Dark Paradise Forever takes a sweet and chocolatey treat and runs with it, with rocky road the inspiration behind the most indulgent and lush member of the series yet. It’s been a few years since I’ve tried a piece of rocky road but assuming they still tend to be made with milk chocolate and filled with flavours of cherry, marshmallow and vanilla, then we can safely say that we have a faithful tribute on our hands.

If you'd like to try a mix of beers that aren't quite as creamy and support an important cause, packs of Hop Nation's Communitinnies supporting Bendigo Foodsahre are still available.