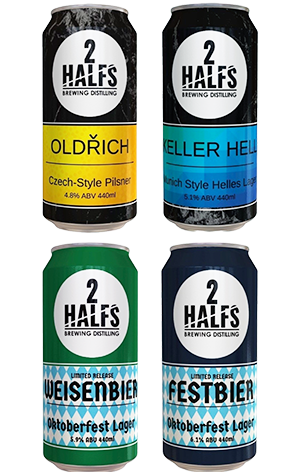 As a weird old lager-loving freak, the September-October period is basically my Christmas. Oktoberfest celebrations have been increasing in number over the last few years but, in 2022, I’m certain there has never been another time in history when so many different freshly brewed lagers are freely available to all and sundry. More breweries than ever now count lagers among their regular offerings – and one just took at top gong at the Indies – but during the Oktoberfest period this turns into a sort of delirium.

Sydney’s 2 Halfs have always poured multiple lagers at their Alexandria brewpub but, for the first time, they’ve got no less than four different lagers encased in aluminium and ready to go: the Oktoberfest-inspired Festbier and Weisenbier, a Munich style helles, and a Czech pils.

Going by ABV seems as good a way to do this as any, so let’s get stuck in! Oldrich is a Czech-style pilsner that’s picked up a couple of medals since being one of the first beers brewed at 2 Halfs. And with good reason: it’s about as faithful to the original old world pilsner as you could hope to get. Czech Saaz hops lend plenty of floral and herbaceous aromas to accompan- the bready Bohemian malt. The malt base comes across like a freshly baked flour tortilla spread with the thinnest layer of sweet honey that leads into a restrained spicy bitterness. Finish is clean, crisp and superbly quaffable.

Keller Hell is a Munich style helles that’s been hopped with German favourite Mittelfruh and modern darling Mandarina Bavaria. Helles have a much more similar malt and hop character to Czech style pils than German pils, which tend to be much leaner on malt and more assertive on the bitterness. In fact, tasting this side by side with Oldrich is a great way to showcase the subtle differences between German and Bohemian ingredients. Like Oldrich, Keller Hell has also picked up a couple of medals at the 2022 Sydney Royal and the Indies, starting starts with a grainy-sweet malt aroma with notes of floral citrus. The bready malt body is less sweet than the Czech pils with a more rounded mouthfeel and finish. There’s a really attractive, clean German lager profile here that nudges this just ahead of Oldrich for mine.

With those two classics out of the way, let’s party, shall we? The first of the two Oktoberfest beers is the much less common Weisenbier. Don’t be confused by the name, this isn’t a hefeweizen. This is a German lager that’s been brewed with a large percentage of wheat malt and fermented with a lager strain. The clove and banana phenols from the traditional hef strain are nowhere to be seen. Instead you’ve got a rich lager, positively swimming in bready malts. She pours a sort of light bronze with a slight haze and a deeply bready aroma. The palate is hop spice, pretzel crusts and fresh white bread. There’s a mild bitterness, but this baby is all about that textured wheat malt. Really lovely.

Our second 2 Halfs Oktoberfest beer is the titular Festbier. Despite my love for the style, I’m actually glad we only get to see these beers once a year. Absence/heart, all that jazz. Plus if I had ready access to 6 percent ABV fresh German lagers at all times I might actually die. Hopped with Perle and Mittelfruh, this golden hazy Festbier has a beautiful German hop profile. I feel like a hack once again describing the aroma as herbal, floral and spicy but there’s genuinely no getting around it. The malt here is less sweet and doughy and more like salt crackers and white toast to balance a more pronounced bitterness. The increase in alcohol is barely noticeable with an exceptionally clean finish that remains just as drinkable as any beer a percentage or two lower. Ein Prosit der Gemütlichkeit to all!

Order all these beers here