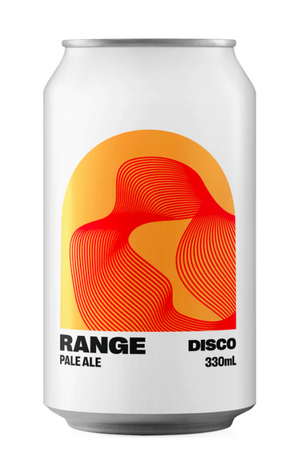 That’s the catch-cry of Range Brewing, and has been since the day they opened. For almost five years, they've released new beers every week, using each batch to try something different: re-interpreting styles, experimenting with different methods, and combining ingredients in different ways. Sometimes they go broad, sometimes they go deep, but always they’re asking the question; “What if we do this…?”

Those five years have played out as a kind of extended period of R&D for Range, as they’ve taken all they’ve learned and discovered to launch The Forever Range† – beers that will remain available week in, week out, even as the brewery keeps churning out limited releases. (You may know this as a core range.)

Of course, the world wouldn’t make sense unless Range’s first core beer were hazy, and so it is. DISCO is double dry-hopped (obviously) with US and NZ hops, giving waves of passionfruit and orange juice notes. It’s yellowy-orange and cloudy as all get-out, and carries just enough bitterness in the back end to keep the flavour party going.

† Of course, this doesn’t mean they’re going to stop their approach of making new releases every week. Who knows what fruit it will yield in another five years?