With brewing skills honed across the globe in Hawaii, Japan and the States, Burleigh's brewmaster Brennan Fielding was always likely to bring a better quality of beer to the Queensland coast when he and wife Peta embarked upon their dream of opening a brewery in her home state – a dream they first discussed back in the late 90s.

Originally housed in a dedicated production facility a few kilometres from the Gold Coast's beaches, with a 45 hectolitre brew length that dwarfed most micros when first commissioned and remains among the largest today, they still sell most of their beer locally; Peta jokes that she'd love to be able to shift all of their beer within 5km of the brewery. Their first two releases, a Premium Lager and a mid-strength Helles under the Duke banner, are still only sold at bars and bottleshops in the local region, inspired by the German tradition of breweries supplying their own communities. The remainder of the range – all unpasteurised and brewed in house by Brennan and his team – is available nationwide.

They are beers that have brought Burleigh much success. The biggest prize was a gold medal for the Hef wheat beer at the prestigious World Beer Cup in the US in 2012, while there have been gold medals at the rolling World Beer Championships for most of their other beers. Among the regular and "Bit on the Side" seasonals you'll find beers that showcase punchy New World hops, such as the 28 Pale Ale, Hassle Hop and FIGJAM IPA, as well as the English-inspired My Wife's Bitter and delicious Black Giraffe coffee lager.

Consistent growth saw the brewery steadily eat up more and more units at its original Burleigh Heads home until, in 2015, they realised it was time to move. They haven't moved far in terms of distance but their new home – still in Burleigh Heads – does give them a lot more room in which to make a lot more beer. There will be more beers too, with the new site home to a pilot brewery.

The new location features an impressive Tap House too, one that is open on more days and is far more spacious than the bar at their former home. There will also be brewery tours, behind-the-scenes tasting opportunities with Brennan himself, live music and regular food trucks that look set to enhance the experience further still.

Only sold within the locality of Burleigh's Gold Coast brewery, Duke Helles is a European style lager ' with a slightly more malty character than the perhaps better known Pilsner style. The moderate hopping contributes a comfortable bitterness and a clean, refreshing taste. Fine and balanced with fresh floral highlights that hint at a European pedigree. For a food match, the brewers recommend anything from a backyard BBQ to a delicate gourmet meal.… Read more
Golden Yellow

One half of the Duke duo of beers only sold within the brewery's local area, this is inspired by the European lagers brewer Brennan Fielding's father and grandfather enjoyed on the back of the family sailing boat in Hawaii. This filtered lager mixes biscuity malts with light, citrusy and spicy hop characteristics and finishes dry, making it ideal for the warm Queensland coast.… Read more
Pale Yellow

It seems that pretty much every microbrewery in Oz has some form of wheat beer in their range, but they're not always particularly good. Thankfully, Burleigh's HEF is among the best, with flavours as full as the moustache on its label. Winner of the inaugural Queensland Food and Wine Show beer comp, it's packed with banana and clove aromas and flavours from the special German yeast with a touch of citrusy tang. Goes well with seafood or spicy dishes.… Read more
Golden Yellow

Styled as a throwback to the 70s and the 28-day swell enjoyed at Burleigh Heads during that decade, the 28 is a fine addition to the canon of Australia pale ales. Floral and citrusy on the nose, it pours a bright copper, with some sweet caramel malts and a bitter tang with hints of orange marmalade, grapefruit and lychee, rounded off with a gently tingling zing. If you're pairing it with food, the brewers recommend Moroccan Lamb as the perfect match.… Read more
Golden

First seen as a limited longneck release from Burleigh back in 2009, the My Wife's Bitter is their take on the classic bitter ales of the UK. Now it's out in 330ml stubbies on a much wider release - and appearing on a fair few taps too. Using English crystal and chocolate malts, traditional English hops (Fuggles and East Kent Goldings) plus an old English yeast, the result is a malt-driven beer that mixes sweet caramels, some nuttiness (particularly in draught form, where we're plumping for hazelnut)… Read more
Rich Brown

Bighead is Burleigh's "no carb" beer, a lager registering just 88 calories per 330ml bottle for the most weight conscious of beer drinkers. Burleigh Heads, where the brewery is based, was originally given the name "burly head" - aka big head - back in the 19th century, hence the naming of this beer. Described by the brewers as "a full-flavoured, full-strength lager that is 100% natural, free of additives and preservatives, and has a smooth, clean taste".… Read more
Pale Yellow

Originally brewed as a short run limited release for the brewery bar, the FIGJAM later appeared in the Gold Coast brewery's longneck "Bit on the Side" range. Bloody lovely it was too - clean yet complex with lots of hoppy goodness crammed into every bottle. We put it in our pick of the Best Beers of 2012 in James Halliday's Wine Companion Magazine and, as such, are delighted that it has now been added to the brewery's year round range. The blend of specialty malts and five US hops remains,… Read more
Golden So, in an era when highly hopped beers are de rigeur, what does "All Ways Hopped" mean? In the case of Burleigh Brewing's brewmaster Brennan Fielding: "We utilised our hopback, multiple dry hopping methods at numerous stages and our own in-house specialty hopping techniques." In doing so, they've created a beer that isn't that hazy when measured against many hazies on the market today and in which the aromas don't explode out of the glass as you might expect. What all those hops… Read more
Golden It started as a Burleigh Brewing Taphouse exclusive beer… and the people there loved it. So it made its way to Crafted Festival and Beer InCider… where it sold out. The Burleigh Brewing crew can take a hint, so they went and brewed more of this people pleaser, and now the pink stuff is available in a limited run of four-packs of tinnies. I say "pink", but it looks almost exactly like a light red wine - the low carbonation even has the head dissipating quickly to maintain the illusion.… Read more
Red The Black Giraffe was one of the first releases in Burleigh Brewing's Bit On The Side series, with the black coffee lager making its debut way back in 2010 and promptly picking up a gold medal at the World Beer Championships in the US soon after (a feat repeated many times since). It made a habit of reappearing, sometimes a little tweaked but always the same at heart, in large bottle format and has now made the transition to cans. It's a combination of coffee roasted locally to the Burleigh Heads… Read more
Dark Brown 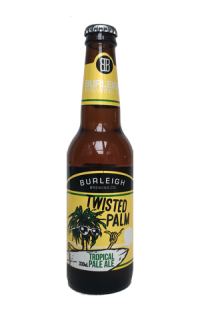 Given they're located on the Gold Coast, perhaps it was only a matter of time before Burleigh Brewing entered summer ale territory. They've done so with Twisted Palm, tagged as a "tropical pale ale" and a beer inspired by head brewer Brennan Fielding's desire to "bottle a day on the beach at Burleigh Heads". To him, that meant opting for plenty of juicy hops, with Twisted Palm (named after the local pandanus trees) the sort of lively, refreshing beer you would want to grab out… Read more
Golden Yellow

Find it at the Burleigh Brewery or here

With a heritage that includes the Black Giraffe Coffee Lager, Figjam IPA and Hassle Hop, if there's one thing that can be said for Burleigh's Bit on the Side range it's that they're worth checking out. Latest to leave the Gold Coast in longneck form and march across the land is Dream Date, a beer that, like Fanny Gertude's Anzac Bickie Beer (remember her?), has a rather sweeter inspiration than the others. Specifically: dates. And even more specifically: "Hundreds of kilos of them" added… Read more
Rich Brown

In any healthy team, there will always be differences of opinion, a willingness to debate, an appreciation that sometimes compromise is necessary to reach the best possible outcome. But sometimes, even a healthy team can decide that compromise can take a running jump and everyone can have their own way at the same time. Certainly, that seems to be what's happened at the Gold Coast's Burleigh Brewing, where a debate over the best hops currently available on the market - with five brewers arguing the… Read more
Golden

This annual collaboration between the Gold Coast's Burleigh Brewing and their nearby roasters Zarraffa's Coffee is one we look forward to at Crafty Towers. And this year's release is another welcome arrival. Featuring "hundreds of kilos" of freshly roasted coffee, it's a seriously black and seriously balanced lager. The ethically-sourced, Guatemalan coffee joins chocolate, caramel and toffee malts to ensure it's part of a rounded brew rather than dominating, while the American hops are… Read more
Black

Avid readers of The Crafty Pint and its newsletter will recall mention of a short run IPA from the Gold Coast's serial medal-winners. Well, now it's back as the latest in Burleigh Brewing's longnecked "Bit On The Side" range, following My Wife's Bitter, Fannie Gertrude and the Black Giraffe. This is a take on the American reinvention of the classic British style, featuring a blend of specialty malts and five US hops and ending up with the 7 per cent / 70 IBU measurements that has proved… Read more
Golden

For an exhaustive list of other stockists, head here.

Gold Coast's Burleigh Brewing has a habit for picking up trophies and medals for its beers. And when the Black Giraffe was first released a couple of years back it was no different, with the coffee lager scoring a gold medal at the World Beer Championships in the US. The 2012 release is slightly tweaked. It still rocks in at five per cent and is still brewed with 100 per cent 100% rainforest alliance coffee beans from Zarraffa's, this time sourced from Guatemala and promising "a more intense,… Read more
Dark Brown

Hunt down a Giraffe here

Fanny's back! The beer that made its debut on tap at The Local Taphouse's Great Australian Beer SpecTAPular had a genesis as unusual as the actual brew itself, with deliveries of ingredients held up by the Queensland floods, thus making it a race against time to have it ready for the festival. As for the beer, the Gold Coast brewers added everything you'd expect from an Anzac bickie - coconut, golden syrup, oats - to create a really rather unique beer. Equal parts cream soda, nuts, toffee and the… Read more
Golden

The second of Burleigh's limited release longnecks (the first being the puntastic English style My Wife's Bitter), the Black Giraffe is the beer that, more than any other, got Aussie craft beer lovers talking about the brewery. An exquisite coffee lager that packs in more flavour than is decent for a 5% beer, it's won major awards overseas with judges impressed by the full coffee whack backed up by chocolate, toffee and mocha. It uses 100kg of Zarraffa rainforest alliance coffee and made Crafty's… Read more
Dark Brown