Born out of a passionate backyard brewing project in suburban Perth, Black Brewing Co has its roots firmly planted in the ethos of “making good booze and having fun” and continues to do business with this in mind at its Caves Road home in Margaret River.

The brewery shares a name with one of world’s largest freshwater crayfish, the critically endangered Black Hairy Marron, found only in Margaret River and the creature that adorns Black's labels, albeit straddled by a Dionysus-like character. (We're pretty sure god-transportation isn't the cause for the low numbers, however.)

Opened in late 2015, Black’s Margaret River location houses a brewery, winery, gallery and distillery on the northern third of Caves Road under the Caves Road Collective banner. Indeed, the vines, manicured gardens and Zen reflection pool on approach to the brewery might have you believing you’ve arrived to sample chardonnay not saison. Yet, despite its cavernous, modern digs, the brewery steers clear of the R&M Williams, "chinos and checked shirt" set, even if there is a subtle influence from the neighbours.

Black’s executive chef offers a pared-back menu including shared dishes and pizzas with a focus on using great quality local ingredients from the ocean, pasture, garden and pantry. The tight menu covers the ocean, garden and pasture with bespoke bar snacks and a kids' menu that should enable a long afternoon of share plate grazing, watching the sun lengthen the eucalypt shadows on the estate’s lake.

Scan the fonts and you'll see sessionability is the focus. Session Ale and Lager keep things straight ahead, while the Pale Ale and IPA bring a modernity that will sate craftier tastes. Then, as the days darken, the lactose-infused Bao Bao Milk Stout brings a similar level of drinking pleasure that’s best enjoyed beside the brewery’s double-sided fireplace.

The original German-built brewery has been extensively expanded to allow for increased volume and special releases that have included a 8.5 percent ABV Bad Boy Bao Bao Imperial Milk Stout and seasonal release sours in an approach that keeps things interesting for drinkers and brewers alike.

Collaborations also include the memorable Kuld Creamery ice cream beers where the brewery and ice creamery have collaborated multiple times for the likes of Neopolitan Stout, Orange Sherbert Berliner Weisse and the most recent Banana Split Dunkel Weiss.

Additionally, Black releases 50,000 bottles of wine each year as well as a range of gins, under the Dune Distilling label, which uses water from an onsite natural spring and has a range of other spirits taking shape in barrel.

As for those pushed for time during a busy South West weekender, they can take the full complement of Black's commitment to “making good booze and having fun” home with them via the venue’s cellar door. Sitting somewhere between a summer ale and an Australian pale ale, Fresh Ale has the right to claim the title of Black Brewing's chief esky filler. Pouring with straw-tinged, crystalline clarity, it's a beer that couldn't be more aptly named. Refreshment is the name of the game here but with an unfussy agenda there’s still room for subtle detail. Mosaic, Calypso and Melba hops imbue light lemon and grassy notes leading to a subdued bitterness that finishes crisp; that said, it’s the furtive… Read more
Pale Yellow It's fair to say Black has designed its Pale Ale in the spirit of the classic American pale ale. There’s plenty going on in beer these days, but there’s a reason why this style helped launch an entire industry and Black’s debut celebrates all of it. A pure expression of Simcoe’s citrus is underpinned by a prickly pine needle bitterness that lingers through the dry finish. Rye malt provides subtle spice and, at 47 IBU, this Pale Ale certainly packs more punch than many contenders, albeit… Read more
Golden Signalling its intent from the go, Black’s papaya coloured IPA can art evokes warmer weather and tropical fruit punch before even a single drop has hit the glass. El Dorado hops, supported by Citra and Chinook, ably deliver on this promise with papaya, mango, passionfruit and a pithy orange undercurrent featuring in a relatively lean beer. Not quite a West Coast IPA and not a classic Pacific Northwest IPA, in true Black fashion this IPA charts its own path to create a beer that’s lighter in… Read more
Golden Yellow Of Black’s debut range, one beer has become a fan favourite above all others yet it’s also a beer that’s experience some evolution. Originally released with a higher ABV, Bao Bao has settled in to a more sessionable space although the baby still likes to flex its muscles occasionally in bolder, barrel aged editions as well as an imperial version, Bad Boy Bao Bao. While the label is bold, the beer itself is calm, welcoming and deftly effective. The lineup of specialty malts is joined by East… Read more
Black 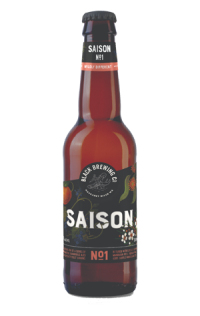 Not many breweries have a saison as a core range beer. Yet, while Black's decision to include one might seem a quiet revolt against norms, it's one that makes a lot of sense for Australian beer drinkers. Although conditioned over many generations to quaff pale lagers, many would argue the saison style better suits our cuisine, weather and lifestyle. It’s a concept the Black team is very connected to, with Saison #1 being a base for future explorations and expressions of all things saison. For now,… Read more
Pale Yellow Black’s Lager is everything it claims to be on the label – "crisp, clean, dry" – however, there is subtle nuance and technique for the observant to unearth. Aromas of sweet malt, muted citrus and faint floral characters lead to similar flavours. The double decoction mash technique and Spalt hops are decidedly German, but the 15 percent rice in the grain bill is a nod to not only the crisp Japanese lager style but also the previous owner of the original Black Brewing kit. In a further… Read more
Pale Yellow Black Brewing hit the ground running on day one of spring 2020, dropping not one but two fresh beers from their Caves Road brewhouse, ready to embrace warmer weather sipping. The two beers – a Bavarian citrus wheat and a banana split dunkelweizen – have some commonalities, both German in inspiration and with fruity dispositions. The similarities end there, however, with each offering up uniquely different drinking experiences. The Citrus Wheat is light in character and loaded with the zest of… Read more
Pale Yellow For many, 2019 felt like the year of the fruited sour, particularly through the hotter, drier summer months as crafty drinkers nationwide were treated to an array of heavily fruited and carefully curated sour beers. The fruited sour, however, seems to be less of a trend or craze and more something that's becoming a staple for many breweries who are finding a new and intrigued clientele drawn to colourful, mouth-puckering beers that offer refreshment and a point of difference. Black Brewing Co certainly… Read more
Red Margaret River’s Black Brewing have debuted a seasonally-adjusted sour range with this raspberry and rhubarb crusher which aims for maximum fun and refreshment. As such, the fruit and vegetable additions – yep, that would be rhubarb, which was hand squeezed for the keg stock – radiate a hot ruby colour while the sour side of things provides a gentle acidity rather than jowl sucking. This, and the drying light spritz, balances the fruity raspberry characters that evoke Zooper Doopers as it… Read more
Red

Summer Sour is available in limited release from the brewery and Black stockists throughout WA. For their latest dessert-inspired collaboration, Black Brewing and WA ice cream artisans Kuld have focused their attentions on the tri-coloured Neapolitan treat; apparently three ideas in one beer are better than one in the two previous. Chocolate, strawberry and vanilla flavours present in the lactose infused sweet stout, as you'd hope, which arrives as a gleeful, cross-stripe gambit rather than distinct layers through its length – after all, what child really took the time to explore the nuance… Read more
Black What better way to show beer how much you love it than showering it in rose petals? That's what happened when Tim "Gunslinger" Hoskins from Black Brewing and Amos "The Beer Walrus" from Old Faithful in Perth's CBD got together to create their latest collaboration, Faithfully Yours. The idea was to create a unique rose water sour you could share with your significant other. Tim even features on the decal in a reference to the movie American Beauty (Amos has appeared on decals… Read more
Red 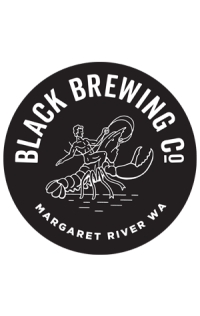 Black Brewing staple Bao Bao returns more petulant than ever as Bad Boy Bao Bao, an imperial milk stout. As with the original, lactose creates a full mouthfeel that plays well with the milk chocolate characters; however, this Bad Boy deviates with additions of vanilla and cinnamon. The latter evokes an almost cola vibe as proceedings turn considerably dry mid-palate as cocoa becomes more evident and cinnamon more pronounced as it warms. The result is a very effective imperial pastry milk stout… Read more
Black