It’s such a simple question, but when it comes from a smiling bartender standing at the beer taps, it brings with it so much opportunity. It’s a world apart from the monolithic and monochromatic beer culture of decades ago, and more the vibe of farmers’ markets, where customers are invited to look over the diverse produce, to smell the aromas, to taste the flavours, and finally to choose what will bring them the most delight.

This is the vibe of Brouhaha.

It’s a brand that has so much going for it. A broad spectrum of beer styles and a reputation for exploring new flavours, particularly the way different fruits work together in sour beers. A colourful design that uses pastel tones on a clean white background to reveal the array of said flavours and connect to all kinds of people. Two welcoming venues with distinct personalities: a cozy and organic brewpub nestled in leafy Maleny, and a breezy and slick warehouse site in the burgeoning Aura community. A diversity of patrons, from the locals who warm the bar stools every Friday night to the beer pilgrims who travel to the Sunshine Coast from afar to sample Brouhaha’s wares fresh from the source.

This vibrant success is something Brouhaha’s founders could hardly have expected when they began in 2016. They were four Sunny Coast locals with an itch to start a brewpub in Maleny and a pipe dream of expanding someday, and were pleasantly surprised by how rapidly Brouhaha’s reputation grew. The brewery became known for the quality of its beers in general, and for the excellence of its fruited sours in particular; the award-winning Strawberry Rhubarb Sour, kettle soured with local Maleny Dairies yoghurt, went from being a small batch brew to joining the core range and going on to outsell the next most popular beer three-to-one.

As the clamour for Brouhaha beers grew to a crescendo, the brewery smashed their five year goals in two years. They produced an admirable amount of beer and did what they could to expand, but there was only so much brewing equipment they could squeeze in beside the kitchen at the brewpub. The brewers found themselves chasing their tails to keep up with demand for their core range beers, and not having the time to explore and experiment with flavours in a way they’d enjoyed doing in the early days.

The solution? A second site that can pump out more beer. A lot more beer.

The original site, Brouhaha Maleny, got to keep its charm as a hinterland wonderland: a warm, timber-toned brewpub perched among the trees. The chef continues to use local produce in the dishes, and the brewers use the brewhouse as a kind of playground where they can play with new fruits and flavours to their hearts’ content, making seasonals and limited releases and experimental batches.

The second location, Brouhaha Sunshine Coast, opened in Baringa in late 2021. It’s a production brewery capable of pouring forth beer like a seemingly limitless underground spring. The brewhouse itself was custom built to handle Brouhaha’s high volume of souring: the presence of two separate kettles means there’s space to keep brewing while one dedicated double-sized kettle is full of sour beer patiently doing its thing. The back wall of the brewery is lined with fermenting tanks full of the brewery’s core range beers, and since the building takes up four warehouse lots, there’s plenty of space for more rows of tanks as Brouhaha continues to grow.

But Brouhaha Sunshine Coast isn’t all work, no play – a bar and taproom at one end of the space is where punters can enjoy the fruits of the brewers’ labour with a coastal vibe. Sixteen taps pour beers for all tastes, complemented by a collection of Queensland wines and Aussie spirits. There’s even a tidy cocktail list, with the beerific Strawbarb Gin Sour as the headliner. Sustenance comes from the food trucks driving right in through the huge roller doors, and entertainment from the live musicians on Friday and Saturday nights letting their tunes fill the building.

More people are discovering Brouhaha all the time as the brewery’s footprint grows and the clean but striking tinnies make their way into fridges around the country. But for all the expansion and change and refreshed branding and the second venue and the ever-growing number of tanks… you can still walk up to the bar in Maleny or Baringa and have a smiling Brouhaha staff member ask: “What do you like to drink?" 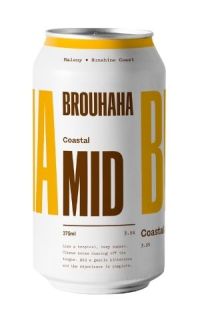 “This is the beer all our staff go to at knock-off.” Brouhaha has plenty of bigger flavoured beers, but it’s hard to beat Coastal Mid as a light and sessionable drop. It looks like cloudy yellow apple juice in the glass, but the aroma wafting from the glass is one of gentle citrus, and that citrus tang joins with an almost savoury malt character on the palate. Coastal Mid hits the spot after a hot afternoon at the beach or a hike to the waterfall, or it makes for an easy-drinking bevy after… Read more
Golden Yellow 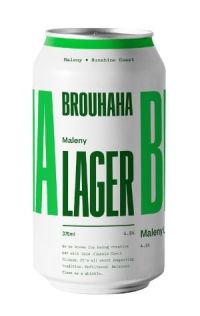 This isn’t one of Brouhaha’s popular hop bombs or fruit-and-yoghurt sours. This is a golden, clear, clean Czech-style pilsner – and it’s a beauty. Lager is generally seen as a warm weather drink in Australia, but Maleny Lager has enough depth of flavour to make it an equally good choice on a cool evening in the Sunny Coast hinterland. Subtle grain character; mild sweetness; noticeable bitterness hovering around the edge of the mouth. This is everything I’m after in a Czech pils (short of… Read more
Golden 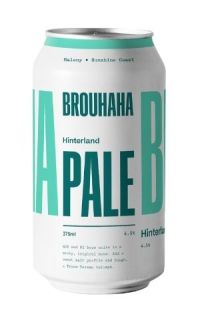 Naming this beer after the Sunshine Coast hinterland is spot on. The lushness of the hinterland grass brings to mind New Zealand, the proximity to the beach is perfect for tropical fruits, and the cozy fireplace winters are begging for a malt-powered beer. To my mind, Hinterland Pale only just creeps into the pale ale category, since it’s not actually all that pale. It sits in the glass with a coppery depth, like you’ve got yourself a schooner full of bourbon. And it’s not just the colour that’s… Read more
Rich Brown 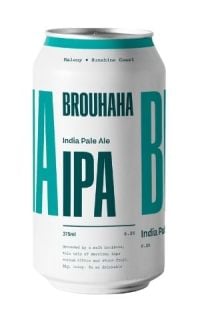 There’s a new breed of West Coast IPA that capture much of the WCIPAs of former days – gorgeous clarity, solid malt core, zingy grapefruit peel, resinous pine – while toning down the palate-battering bitterness that some drinkers didn’t like simply because it was "too much" or "caused permanent damage to their tastebuds". The IPA in Brouhaha’s regular lineup is part of this breed. Bright and shining in the glass, this drop shows off pine, grapefruit and stonefruit on… Read more
Golden 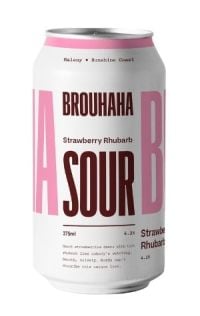 Brouhaha’s Strawberry Rhubarb Sour started life as a great idea: a special release Berliner Weisse that uses Maleny Dairies’ natural yoghurt as its souring culture, with sweet strawberry and tart rhubarb bringing their complementary flavours to the mix. It was popular with punters, so it joined the core range, and its popularity grew. And grew. And grew. But celebrity can bring difficulties. In the case of Strawberry Rhubarb Sour – nicknamed Strawbarb by the Brouhaha crew – the main difficulty… Read more
Red 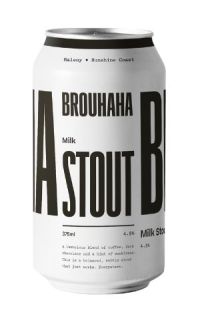 Lactose can do a couple of things to a stout. It can turn it into a sweet and sticky dessert beer, or it can add a silkiness to the body and provide a gentle sweetness to balance out some of the bolder stout flavours without overpowering them. Brouhaha’s Milk Stout enjoys the latter. The rich brown head offers up chocolatey aromas, but then quickly gets out of the way to show off the shiny liquid obsidian beneath. The chocolate is joined in the mouth by roastiness, but the edge is taken off the… Read more
Black 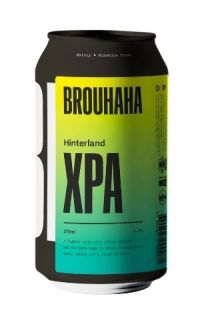 With their broad core range (seven beers!), their split batches, and their fun seasonals, it’s obvious Brouhaha are all about giving drinkers plenty of options. Since their regular pale ale is malt driven, they brewed a keg-only XPA that dials back the malt for a crisper take. And when that proved popular, they brewed it again and popped it into tinnies. While the core Hinterland Pale has a coppery colour and caramel malt sweetness, the Hinterland XPA is extra pale and extra clean. I expected nothing… Read more
Pale Yellow 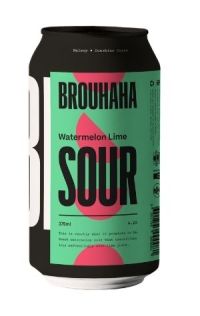 Brouhaha first made this beer for GABS in 2019, but this was always a recipe worth returning to. At a glance, it looks like a lager – pale gold and crystal clear – and may have you expecting a beer that's low on flavour. But bring it to your face and this is sharp and sour and big ol’ fruit right from the get go. The lime wants to take the lead here, and it almost manages to dominate as it hits like a straight shot of Bickford’s Lime Juice Cordial.† But the sweet watermelon shows in the… Read more
Golden Yellow