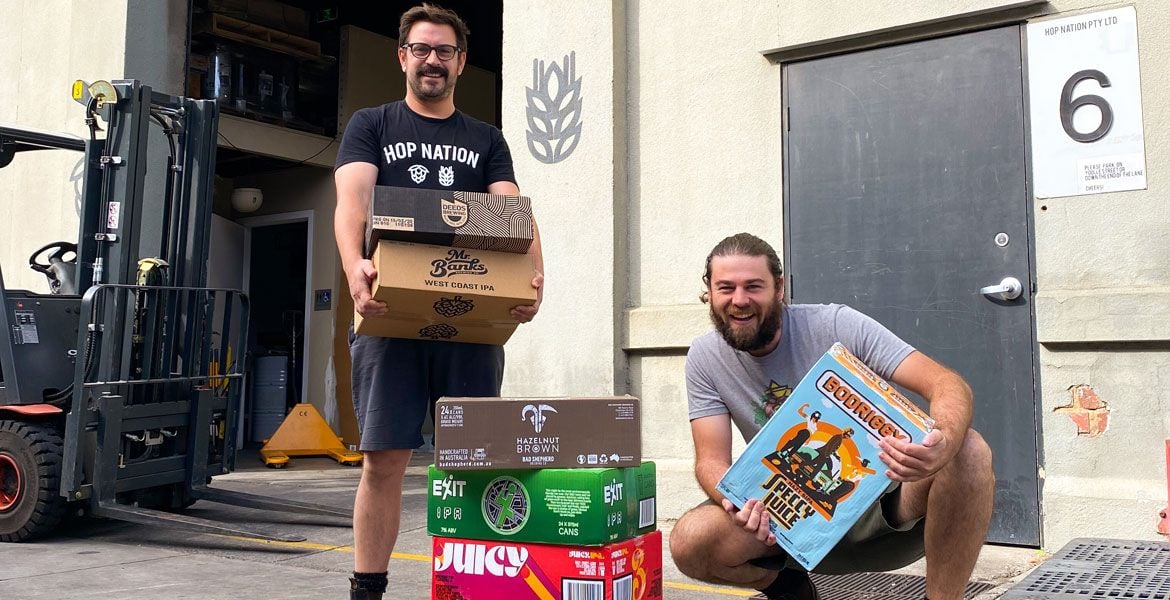 The beer industry, especially when it comes to the smaller end of town, has always been one fired by a spirit of collaboration. And it's one that's still shining through even as businesses are forced into survival mode and faced with making tough decisions daily regarding operations, staffing and where to focus their dwindling resources.

This spirit of togetherness is writ large in projects such as the Heaps Good Indie Beer packs launched this week by a collection of SA brewers and the Communitinnies series led by Hop Nation in Melbourne – one that's set to hit Coles and Woolworths stores soon too. As with Carwyn Cellars' Quaranitinnies packs, they're a case (well, lots of cases) of win-win.

On the one hand, beer lovers get to experience a stack of different beers from local brewers. On the other, those brewers get to move some beer in these challenging times, thus keeping a little cash flowing, while harnessing the collective power of all of their combined audiences.

The South Australian venture has been driven by James McCall of Shapeshifter and Tony Dichiera from The Suburban Brew, who rounded up ten of their brewing peers to put together mixed 12-packs that also promote the #keepinglocalalive message while giving customers what Tony calls "a snapshot of the SA indie brewing scene".

The idea first arose a couple of weeks ago.

"I was trying to think of a way to help out my fellow South Australian brewers," James says. "Being close friends with many of them, the stress and pain they were dealing with was hard to bear. I wanted to help out, even in a small way, as they have collectively done so much to help us get where we are today with Shapeshifter.

"I'm a big fan of the Christmas canvent calendars that come out every year, and thought we could do an SA only version. I floated the idea on our SA brewer's Facebook group and got a bit of interest. After a few days of planning I contacted brewers directly and managed to get everyone on board. Tony offered his warehouse as a pick and pack location. Carla from Sparkke, Lisa from Prancing Pony, Marc from Mismatch and some of the boys from Big Shed are lending a hand to pack and dispatch. Everyone really rallied around the idea.

"By doing this we can keep stock moving, raise some awareness of how we're being affected as an industry, but, most importantly, supply the loyal punters who might be self-isolating at home."

For Hop Nation, it's the evolution of an idea that started with the launch of their Quarantinnies packs in mid-March, each featuring eight of their own cans. When that name was adopted elsewhere, they moved to Communitinnies – with the tagline "Social Distancing Between Friends" – and invited eleven other brewers to join them in the first pack, which quickly sold out and has been followed by Communitinnies 2 featuring eleven more breweries. And there's more to come.

"It's keeping us busy," says brewery co-founder Sam Hambour (pictured top left with Duncan Gibson). "We've got our sales guys doing the deliveries in Melbourne and have put a bit of time and effort into the website as online sales are a little bit of a survival mechanism at the moment. People seem to be getting behind it and ordering beers from their couch."

He said it has given them an opportunity to work – and share ideas – with their network of fellow brewers too.

"It's not huge volumes but we're able to buy some beer off people and pay them and keep things moving. We rang [other brewers] to ask them if they wanted to be involved but, as much as we're ordering some beer, it's turning into 20 minute chats about how things are going. How are they managing social distancing in a brewery, just little things like that: people dealing with drive-thrus and takeaways, and dealing with bad debt and paying staff or trying to keep staff busy. Some breweries have had great ideas and sharing has been really helpful."

Hop Nation started the year looking forward to the opening of a large production brewery and venue and, for now at least, Sam says, "everything is on hold until there's some clear exit timing" from the shutdown. And it's a similar situation across the border in SA.

James says: "We're all trying to come to terms with it, and adapt where we can. It has been really tough on the guys with venues that were previously open to the public, having to let go of great bar and kitchen staff for reasons beyond their control.

"Everyone's had to pivot very quickly to online sales and click and collect setups. Personally, as contract brewers, we're hoping to weather this storm and try to get out the other side relatively unscathed. Our biggest problem is having a bunch of beer stuck in kegs and, without a taproom to fill growlers or canimals for takeaway, we're trying to decide what the best thing to do with it is. But that's minor to what our friends are experiencing.

"Big Shed are delivering to the boot of your car. Little Bang are doing food and beer deliveries. Prancing Pony has a drive-through. Jade at The Wheaty is now doing take-away crowlers – who'd have thought that would ever happen! There are silver linings to this situation."

For many, it will be hard right now to spot such silver linings, but Sam says the way people are responding, at least once they've dealt with the shellshock of recent weeks, has been inspiring.

"The community spirit that comes out is amazing," he says. "And hopefully that continues."

You can pre-order the Heaps Good Indie Boxes here. There may be follow up boxes too given the interest in this first release. We're told there might even be an all-SA indie collab brew on the horizon too.

Communitinnies boxes can be ordered from Hop Nation's online store – look out for 12- and 24-packs landing in the major retailers soon too. And, if you're in WA, some Liquor Barons stores and Copper & Oak have put together mixed packs featuring beers from a range of the state's indie brewers. Newstead are selling LOCAL LOVE mixed packs from their Milton drive-thru featuring beers from Aether, Black Hops, Sea Legs, Soapbox and Slipstream. And Beer Cartel have put together 350 Isolation Calendars featuring 25 beers.

If you know of a similar project (there's one taking shape in Tasmania we'll tell you about later), drop us a line so we can add the info to this page. As Melbourne's lockdown is extended, and Victorians face their own restrictions, Hop Nation have brought back their collaborative Communitinnies boxes, first launched during the early days of the pandemic. read on