For all the horrors the new decade has been delivering in spades, it's also proving to be a time for heroes. Throughout bushfire season and now the COVID-19 crisis, countless people throughout the country have risen to the challenge, not least those in our emergency and health services.

Now, as we brace ourselves for the peak of the pandemic, a group of local beer businesses have come together to offer drinkers the chance to shout a beer for essential services workers while also supporting local brewers in their home state or territory.

"A Good Beer Always Helps" has been launched by James Grugeon, the founder of the Good Beer Co, which has raised funds and awareness in support of causes including the Great Barrier Reef and marriage equality in the past.

The idea this time around is to enable people to show their support – and put a beer in the hands of – frontline workers, including nurses, doctors, pharmacists and others in the health service, as well as police, fire and ambos, aged care facility and home care workers, school teachers and supermarket workers.

"It's just about having a campaign that does some good for essential workers," James says.

Since launching yesterday (April 6), 372 four-packs had been donated at time of writing – $7,660 in value – with 774 essential workers already registered. The initial fundraising target of $10,000 looks set to be moved upwards very soon...

James – assisted by Joslyn and Matt from Queensland's Hop On Brewery Tours while their business is temporarily shut down by the shutdown – is working with unions and other organisations that represent essential services workers to spread the word.

Like pretty much everyone else in the beer and hospo industry, his social enterprise has been suffering too. He was due to launch the Good Beer Co in the UK in partnership with Adnam's this winter, following the success of the Great Get Together Pale Ale project which raised money for the Jo Cox Foundation, but that has been postponed with no guarantee it will now take place.

Yet it was in the UK he found inspiration for this new venture.

"I saw my good mate Alan Mahon [of Brewgooder] doing the fantastic #oneoneus campaign for the NHS and thought we should do something like that here," James says, "but broaden it out to all essential services workers.

"I had a chat to see how it was working for them and about the dynamics of the campaign."

James said they were chosen as breweries he'd worked with in the past on other projects and because they're known for the good work they do in partnership with other organisations and within their communities.

"They're people who've got that in their DNA," he says. "We'll try to bring in others as well so you're doing a good thing for people on the frontline while also helping out craft breweries who are doing it tough."

Sparkke co-founder Kari Allen adds: “To be able to say thank you in a tangible way to health workers is really important right now. Yes, we’re doing it tough at the moment – but being part of an effort to express our gratitude to the people keeping us safe, is really good for our morale."

Essential services workers can register here and you can donate and leave a message of support here. Photo to top of article features the Sparkke team. 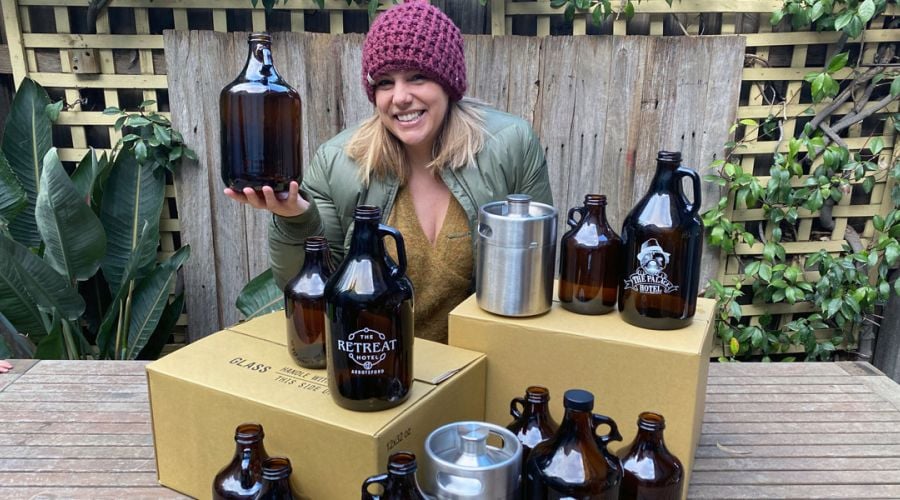