It features a Sunday night quiz hosted by a two-time TV quiz winner and cocktail nights, while past shows have featured foreign films and Instagram challenges, yet somehow it’s about beer too...

Beer Together is a live-streamed YouTube series launched the day after the shutdown was announced in Australia as a means of keeping people connected, talking about beer and hopefully learning a few things along the way.

To date, shows have been hosted by Dave Ellis, Luke Robertson, Tiffany Waldron and Lindsy Greig from Ale of a Time, Ian McNally from The Chosen Brew and his comedian mate Nick Capper, plus members of The Crafty Pint team. And they've featured brewers, sales reps, a comedian and chefs chatting about all manner of topics, including life in isolation.

Ale of a Time’s Luke Robertson has been the one pulling the technological strings behind the scenes of the YouTube channel, using a set of skills he only picked up a little over a month ago when the Indie Beer Showcase went online.

Those Indie Beer Showcases have become weekly Saturday masterclasses as – in the same way live concerts have moved onto Instagram – many in the beer world have looked to take their offerings online. There are breweries hosting chats and venues streaming trivia, bingo, bands and DJ sets, while GABS have been hosting regular brewer interviews as they wait for the return of their festival. In the case of Beer Together, Luke says he’s been impressed how active the audience has been during each live steam and how regularly familiar names keep returning.

“We've got a really consistent audience and are seeing a lot of the same names coming back and really driving the chat,” Luke says. “These are similar to the conversations that you have on the podcast but you get that immediate feedback.”

He adds that, despite the active chat, people have also been keen to treat the livestream a little more like a podcast and listen when suits, with numbers growing about three-fold once shows have finished.

“It means people can engage whenever they want; even if they can’t ask questions live, they can still catch up and be part of the conversation. Which I think is really important at the moment.”

It’s for that reason he can see the channel – or at least a similar type of video content dedicated to beer – outlasting the current venue closures.

“I still love going to the pub but it’s not always possible and sometimes it’s nice to sit at home after dinner and if the footy is on and there’s a virtual tasting I can take part in that doesn’t sound so bad.

“At Meet the Brewer events it can be really hard to meet the brewer because they’re a face somewhere on the bar and they’re chatting to people they know. Here you can ask the questions without being in a loud room even if you’re socially shy or don’t know who they are.”

The passion and connection between beer drinkers and beer makers is one of the many appealing facets that make the local craft beer community what it is and Luke says he’s enjoyed the different approach to telling stories the platform offers.

On Friday night, viewers will be treated to a tour of 3 Ravens’ Thornbury home followed by a guided tasting of new release beers that can be bought now. Luke says it’s not only more interactive than podcasts generally, but allows beer drinkers to better connect with those who make their beer.

“In the case of Wolf of the Willows they could show people the brewery that nobody’s really been in,” Luke says, referring to the Melbourne operation’s new Mordialloc home that was ready to open just as venues closed.

“In most of them, we’ve had people’s pets or family pop up and in a lot of ways that’s really nice.”

You can subscribe to the channel and sign up to the mailing list here. Keep an eye on the Crafty Events Diary for upcoming shows – the Crafty team is on next with Sailors Grave on May 4 – and if you've got an online event you'd like us to share with readers, get in touch.

Photo at top of article features the disembodied head of Luke Robertson keeping score as Judd Owen hosts his weekly Beer Together Quiz live from the stage of Woodstock '99. Again, you kind of needed to be there...

Articles by Will
#keepinglocalalive Postcards From The Edge beer together 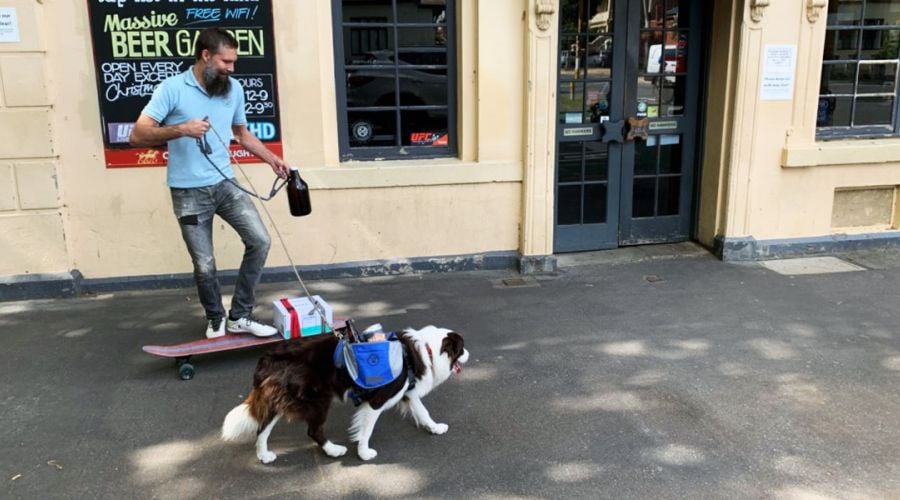