Birthed from WA-based design agency Media Engine, Steve Paulsen’s clothing side hustle began with a single DIY screen print in 2017. This quickly moved to a four-colour print machine tucked under a staircase to the eight colour screen print machine found on a new purpose built mezzanine above the original digital agency today.

Momentum soon turned the idea into Short Batch, a stand-alone business with clients ranging from breweries including Blasta, Feral, Nowhereman and White Lakes to those in the hospitality and fitspo industries.

As craft beer lovers themselves, this success was stunted, like that of many other businesses, by the lockdown imposed to deal with the spread COVID-19.

“A big part of the coronavirus impact has been that we were about to move into a new premise, and maybe get some new machinery," says Jeff Ettridge, Steve's business partner. "We’d just got my brother in full time because we needed more hands, but then COVID hit and our main clientele are the hospitality industry and we saw a drop of 97 percent of business.”

There has been an upside however, as Jeff notes: "We were always hoping for one quiet week to get our heads together and work on some ideas. In a way, COVID has allowed us to nut out El Loco.”

This saw them introduce an online store at the end of April that has allowed them to add a new dimension to the business.

Steve explains: “It’s that local collaborative. We’re working with local business that don’t have the initial outlay to order t-shirts and have them sitting on the shelf, waiting on sales. We send all the orders from here in compostable post bags too.”

Hustle, work arounds and attitude are the rhythm of small business, so when the #keepinglocalalive campaign was launched, the then Short Batch team got in touch. After a few emails and calls back and forth, the team fast tracked the El Loco business by a month in order to support the campaign.

While the energy of the pair is palpable, without a positive attitude this may never had come to fruition.

“The situation was nerve-wracking but, ultimately, with myself, Jeff and the guys downstairs, we’re so headstrong and driven that it was never gonna be the end, no matter what, there was always gonna be a solution," Steve says.

“I’m just confident in the team and the people around us. When you’ve got good people around you then good things happen, always, and in one way or another you just adapt.

“We make it happen, and that’s faith I have in the crew and the team, knowing that no matter what, they are gonna get it done and it’s gonna be great.

“And the #keepinglocalalive t-shirts (being produced in the photo at the top) have been great. We’ve had orders from Queensland, Victoria, New South Wales, Kalgoorlie – it was really cool to see all of these people supporting local businesses.”

They weren't alone among their peers either. We spoke to Thirsty Merchants in this feature about growlers about their challenges post-lockdown and the team at CraftyMerch, again focused heavily on the beer industry, have endured a roller coaster of their own.

"March was terrifying as we didn’t receive any enquiries from either existing or potential customers in the industry," co-owner Eoghan Townshend (pictured above right with business partner Leigh Hope) says. "Prior to JobKeeper being announced we wondered how we’d keep going but thankfully that’s helped us power on through.

"The week after Easter was a huge change, as it felt like all the brewers and bars and venues had figured out their own way of dealing with the situation, and were now ready to get back in touch and look for merch, glassware and, especially during the past month, growlers and squealers – I can’t count the number of times we’ve had to scramble for more stock.

"Production capacities were reduced, freight was impacted, and so there were random delays, but things are settling down for us a little. Keeping up with stock on glassware is now going to be the next big thing."

With JobKeeper allowing them to retain staff and retail sales on glasses helping make up a shortfall from industry customers, they've been working on bringing more production in-house and tightening up processes within the business.

As for the future, he says: "It feels to us like the industry may recover well, but sadly some may not survive."

They've been impressed by the ability of businesses to successfully rethink their processes to enable online sales and takeaways, are confident punters will be keen to get back to bars and pubs for the social aspect, and hopeful the ability for Liquor Licensing to relax rules on takeaways so quickly might lead to faster responses in the future.

"On a CraftyMerch level I think it has given us renewed determination to keep going and growing, Eoghan says. "We love this industry and are so proud of how everyone has knuckled down and got on with it, and we want to be part of the recovery."

NB: The first run of #keepinglocalalive t-shirts have been printed and mailed. Due to demand, a second run is now open for orders until midnight Sunday (May 10). Unfortunately, due to current logistics duress, there is no guarantee these will arrive before Beer Swag Day on May 23. You will still look great in them whenever, though! 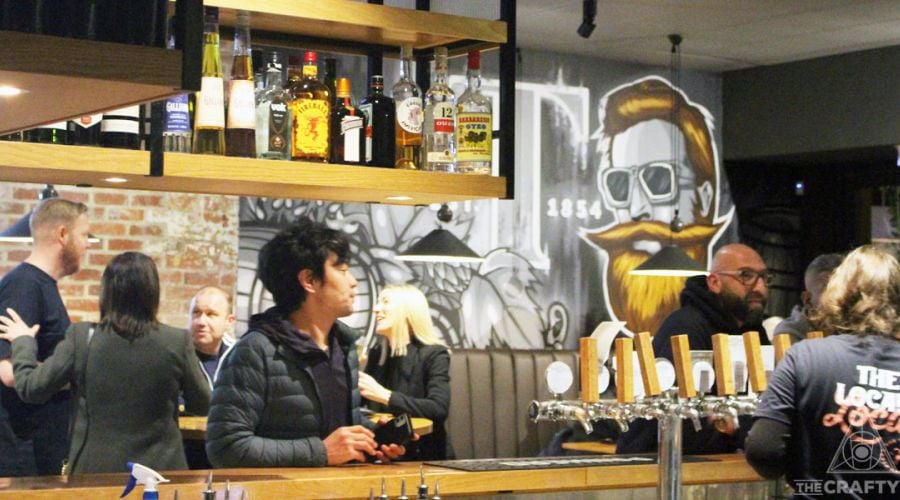