When the country's leaders announced a lockdown was on its way, we witnessed scenes of panic. Bottleshops were cleared out, pasta and rice disappeared, and people were struck with a feeling of confusion as to where they could go and what exactly they could do.

As that confusion went on, others were carefully considering what any closures would mean for those they worked with their employees.

CoVid-19 EAD (Employee Assistance Directive) is such an initiative, one that produces free, chef-cooked, pre-packed meals that are delivered across Melbourne to hospitality workers in need of a feed.

The initiative was launched by Henry Le from Fitzroy cocktail bar Ends & Means and Jason Chan from South Melbourne’s Hats & Tatts. Henry says as COVID-19 started spreading across the globe, he and Jason began talking about ways they could look after their own staff and others working in hospitality they knew would become vulnerable without work.

“Just following the trends from the States and other countries,” he says, "where they were starting to lock down restaurants, bars and clubs, we thought, ‘Hey this is going to get pretty bad.'.”

In the final week of March, the pair prepared 120 meals for 27 unemployed hospitality workers. By the start of this week, they'd made more than 6,000.

After spreading the message of what they were doing a little further and setting up a registration form, Henry says he and Jason immediately saw just how much need was out there.

The pair decided to formalise what they’d been working on and turned into a genuine not-for-profit by setting up an ABN and launching a GoFundMe campaign so people could donate to the cause.

“It’s grown into this living, breathing organisation that's just focused on feeding people and making sure they’re nourished, not just their bodies but their minds as well,” Henry says.

In a little more than six weeks, they've helped more than a thousand unemployed hospo workers, and the support of the industry means donations as low as a dollar or two can cover the cost of a meal. The number of supporters has just kept growing too; the full list can be found on the campaign’s GoFundMe page but includes the charities Oz Harvest and FareShare who have been supplying food, while Rice Paper Scissors, Hats & Tatts, The Lincoln Hotel, Lover and the catering team from The Big Group all opened their commercial kitchens to the volunteer chefs preparing food.

Carlton’s FROM The Collective has turned from being a showcase of regional Victorian producers into a central distribution centre while Colonial Brewing and Wolf of the Willows have been helping out by supplying beer.

In total, close to 60 people keep everything running behind the scenes, including chefs, delivery drivers, spreadsheet wizards and case workers who check in on the mental health of people that are out of work.

“They make outbound phone calls once a week to check on our registrations,” Henry says. “In a lot of cases, that’s the only person they’ll talk to in a week, particularly before they lifted the restriction on seeing your friends.”

Though JobSeeker has been temporarily increased and JobKeeper has kept many employed, most international students and visa holders miss out on such government support despite so many of them working in hospitality. Henry says international workers often lack any real social support network too, which is part of the reason they’ve focused their efforts on reaching out to people who have registered for meals.

“They’re just in a situation where all of their social interactions would come from work,” he says. “So we learnt in the early days that all the mental health component would be just as important, if not more important, for some people as the actual food delivery service.”

Like many business owners, Henry adds that the long-term impact coronavirus will have on hospitality remains unclear and that government support has a time limit.

“That’s going to trigger the collapse of a lot of businesses that were staying open for JobKeeper and that’s not because of mismanagement of a business,” he says of a crisis that blindsided business owners.

“There is going to be a second and third wave of unemployment where those businesses are finally folding because they can no longer sustain their staff and we are going to see an uptick in registrations.

"Your business model before COVID might not actually be sustainable after COVID."

As venues across the country have started to reopen, the conversation around COVID-19 in the beer world has often turned towards the return of some kind of normalcy in everyday life and the fact that we can now get back to the venues we love. But Henry says the new normal may look a whole lot different with many restaurants likely to struggle to find funds to reinvest in their business.

Furthermore, no one knows yet how consumer behaviour might change. Henry says already the number of registrations CoVid-19 EAD lists as needing urgent help is growing and that the initiative will therefore be here for some time to come.

“What we’re doing is an ultra-marathon not a sprint,” he says. “Just because regulations change and we’re able to go out and resume some kind of normalcy in life it doesn’t mean that the systemic issues COVID has caused go away.

“At the moment we’re hitting the edge of the eye of the storm and the worst is yet to come.”

To donate to CoVid-EAD head here and follow their Facebook page to see what the team is up to. If you're a hospitality worker in need of assistance, head here.

Articles by Will
postcards from the edge #keepinglocalalive covid-19 ead 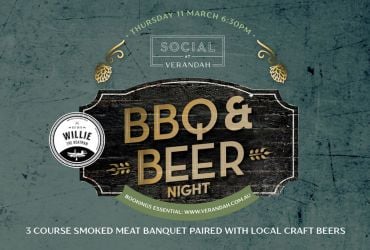 Smoked meats, local craft beers and Willie The Boatman as your host – what a fine way to spend a T…