As with their fellow High Country brewers, the past year has been the toughest imaginable for Bridge Road Brewers. First they suffered through the bushfires, wiping out visitations during the busiest part of the year, before suffering the lockdowns that have impacted Victoria worse than any other part of Australia.

Even now, as they're again able to welcome visitors – admittedly in numbers well below their capacity and only from regional Victoria – they're facing another challenge.

At the start of winter 2019, brewery founders Ben and Maria Kraus flew to Austria with their three kids (pictured above) to spend a year living with their cousins and grandparents in the mountains where the couple first met. While they were staying involved in the business from afar, the plan was to expand their children's horizons and enjoy the experience of a well-earned change of scenery after a decade and a half running their Beechworth brewery.

They were due to return in July this year but, after multiple flight cancellations, they're now booked onto a flight on October 27 – and can't be sure those seats won't also be cancelled as they wait stranded, like thousands of other Australians, by the ongoing COVID-19 pandemic.

"The last time [a flight was cancelled] we had just finished packing our apartment into a crate for shipping home and had moved into the in-laws ready to fly," Ben says.

The pattern to date has been for them to book flights, receive an email as the flights approach offering them the chance to upgrade to business class for an additional €15,000 (approximately $25,000), ignore the email, then receive notification their tickets are cancelled.

"I'm sure it looks unethical to bump off the plebs who can't afford the bigger price, but there's not much they can do," Ben says. "Some of the flights are only allowed 30 people on [so] I assume they fill in those seats at the business class price and it makes the flight viable. I can't argue with that business thinking.

"If they only have business class seats available or if there's only five seats for me and my family, I'd prefer they only sold those seats, but whether we get on the next flight or not is down to the limitations."

Once the Kraus family realised they had at least two months more to wait, the kids started another Austrian school year and Ben decided he needed work and income. In the nearby ski resort of Innsbruck, where he'd first gained brewing experience at Tiroler Bier in 2003, a new brewery was being launched by a group who already had other businesses, including a hotel and restaurant, in the town. So he volunteered his services.

When we spoke for this article, he'd been attempting to buy a couple of specialised parts for the brewery using his limited German after joining as a sort of general dogsbody. But, given his past, he says they've ended up getting the best value brewery consultant you could wish for instead.

"I've been following the progress of a new brewery here in the valley called Baeckelar Brewery," Ben says, "and I sent the owners a message telling them I'm stranded until the end of October.

"They'd asked me to look at their plans last year and I told them later I was going home so wouldn't be there for the install. When the last round of flights got cancelled I said I'm stuck here for two months and need something productive to do.

"They're really smart guys but you quickly realise fifteen years experience helps so much. I've been doing some recipe development, helping manage the inventory and with business planning."

This hasn't been Ben's only experience with brewing while in Austria, either.

"Last month, I was lucky enough to brew a collaboration with my favourite craft brewery here, Bierol," he says. "I introduced the guys to our Mayday Hills beers and brewing with Brett with our Hoppy Sour and Apricot. They were immediately blown away by the complexity of the beers, particularly in the low ABV Hoppy Sour.

"Upon that, they decided to introduce Brett into their brewery and we came up with a beer recipe using local blackcurrants called Currant Mood. Although no one in Australia will get to taste it, I'm pretty sure the girls at The Wheaty would be stoked on the name!"

Of course, the priority remains getting back to Bridge Road Brewers, where they've continued to move forward with new projects in his absence: they're commissioning a canning line, tweaking the look of some of their beers, working on new releases and developing their online presence and beer club.

"We have to take the positives out of the shit situation," Ben says. "Seeing how the team was able to manage through the first round of bushfires and then the first lockdown, they've had to take on a lot more responsibility than before."

As with all businesses in the beer and hospitality sectors, they've been dealing with JobKeeper, putting staff on reduced hours and having to tell casuals there's no work, while dealing with moving goalposts, lockdowns and re-openings, and then managing people's expectations when they do reopen with a capacity of 70 instead of 200-plus and a reduced menu.

"The business can't support what it's having to support," Ben says. "It's break even at best and that isn't how you run a business. The goal at the moment is just trying to get everyone back in full-time and away from short working weeks.

"We're fighting our way through and wouldn't want it to go on for another year. But if we've learnt anything it's that you can't make any assumptions."

Through it all, they've been particularly thankful for the support of members of their beer club, the Posse. While many breweries have launched such memberships in recent years, theirs is approaching its 11th anniversary and Ben says, with "online sales being the intravenous drip for brewers in the ICU ward" through the pandemic, they've spent time enhancing their offering to provide more flexibility of choice and greater value.

"The community that are part of and contribute to the Posse are mostly longterm supporters and advocates for our brewery," he says. "They have provided immense support and positivity through direct and indirect contact over the past few months."

He admits he and the family could have been stuck in far worse places to see out COVID than the picturesque mountain ranges that, after their closure early in the pandemic, enjoyed their busiest tourism summer on record (although cases have been rising again in Austria in recent weeks).

There's been copious mountain bike action, skiing and hiking, and were it not for the fact they need to get back to their business as soon as possible, he says they'd probably have stayed another year.

"Since lockdown ended here, life has returned to normal," he says. "We've had an amazing summer, making the most of the endless local tourism offering and high Alpine landscape. We're really lucky when I compare the restrictions with my family, work colleagues and friends in Victoria."

And while he can't predict what the future holds – or even when they'll make it back to Beechworth via "two weeks solitary confinement locked in a room in a city high rise with three kids" – he adds: "We'll come out of the other side of this with the ability to take on many of the future challenges that are thrown our way."

As part of the #keepinglocalalive campaign we're been running Postcards from the Edge stories, highlighting the ways in which people are adapting to survive. If you've got a story you think is suitable – or have something to add to the campaign resources online – get in touch. 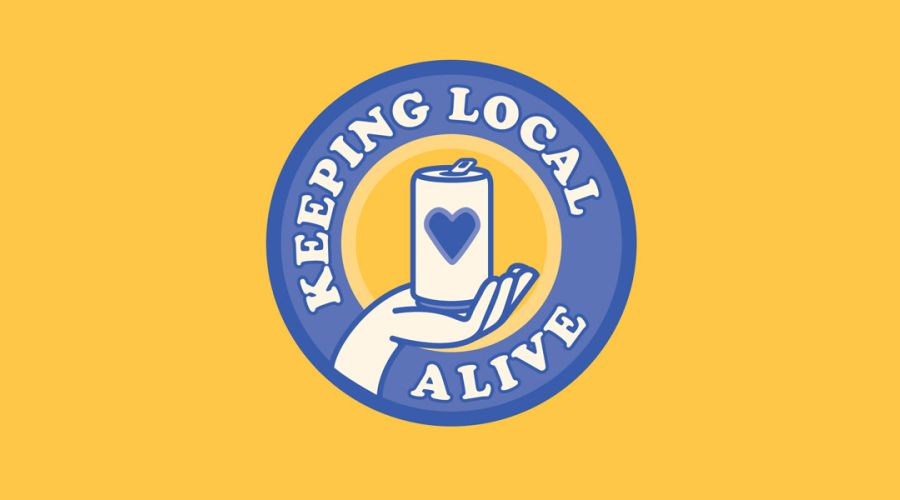 With the winter 2021 lockdowns spreading and looking likely to stick around in some places for a while, we've rebooted the resources section of the Keeping Local Alive campaign to help people wanting to support their locked down locals. read on