Castlemaine will ring in the new year with a new brewery, as Love Shack Brewing Co opens its doors with a NYE party featuring Melbourne psych-rockers The Murlocs. Located behind the regional Victorian town’s heritage-listed Royal Theatre, the launch represents the culmination of an impressive lockdown project by brewers Conna Mallett (above right) and Harrison Cox (above left), who met while working at Stomping Ground.

Harrison taught Conna to brew shortly after Stomping Ground opened in 2016, and most recently had been brewing for Mornington Peninsula Brewery then Hop Nation after the latter took over the former’s Latham Street location.

Conna had a short stint brewing at Stomping Ground’s airport brewpub before he returned to Collingwood once COVID saw that shut down. [The airport reopened a few weeks back, while the Stomping Ground team have just announced a new summer pop-up too – see below]. Conna says it was during the long commute into Melbourne that the idea he and Harrison had often discussed began to take shape.

“I had a bunch of time on my hands,” he says. “On the train, or on the bus, or driving, and you just get thinking about things and go, ‘Fuck, maybe we could do our own thing.'.”

The pair initially looked into opening a bar first and brewery later at another spot in Castlemaine, but instead ended up securing an old shed behind the Theatre Royal after he ran into Tim Heath, who runs the site with Felicity Cripps. Conna wanted to check with the venue owner that he was OK with the new venture nearby; Tim not only gave his approval but gave him a new idea too.

“He showed me and it was an absolute dump.”

Today, the Love Shack is in rather better shape. They've excavated the site, installed new floors and drains, and fitted a six hectolitre brewhouse and three 12 hectolitre fermenters into the small site. Working at Stomping Ground for four years had given them plenty of handy skills in this area due to the rapid growth of the Collingwood-based operation.

While the Love Shack might not be primed for the same growth, Conna says they do have plans to package their beers and send them further afield next year. Their small footprint in Castlemaine means that’s unlikely to happen onsite, so they're considering brewing and packaging elsewhere.

“We can’t package here because the brewery is 36 square metres … and it’s fucking jam-packed,” he says.

What the Love Shack does have is its own bar servicing a beer garden behind the theatre, which has space for 300 people, while their beers can also be found inside.

“We’ll be all through it and we’ll help them curate the beer list as well and get friends on tap too," Conna says. "Stomping Ground are on tap at the moment.”

The Theatre Royal itself is an impressive space, with parts of the current structure dating back to the 1850s. The venue hosted both local and international artists during the Gold Rush and today, as well as operating as a cinema and bar, it’s a highly-regarded live music venue, hosting the likes of Jen Cloher, The Waifs, Dan Sultan and Regurgitator, to name a few Australian acts, while Billy Bragg and the late Justin Townes Earle both performed there when they were last in the country. It’s won Music Victoria’s Best Regional Venue (Under 50 Gigs) three years in a row, something Conna says is a testament to Tim and Felicity.

“The criteria for that is the selection of music, but also how they treat their artists, how the crowds were behaving, and things like that," he says. "It’s voted by the artists as well and they’re all treated really well.

“They’ve showed the same hospitality to us, and they’re just incredible people and really welcoming.”

Love Shack's arrival is just another feather in the cap for the regional town, joining Shedshaker, who have been brewing beer, serving pizza, and hosting musicians in the town's history Woollen Mills on Walker Street since 2016, and another sign the COVID pandemic has done little to slow the country's appetite for more local beer.

Love Shack opens from 1.30pm on New Year’s Eve at the rear of the Theatre Royal, 30 Hargraves Street, Castlemaine. Over summer, the brewery will be open Friday, Saturday and Sunday from midday until late.

You can find Love Shack and hundreds of other good beer venues on the free Crafty Pint app.

Were it not for COVID-19, Conna and Harrison's former employers would have been pouring beers for guests at their third brewpub by now. As we've written in the past, Stomping Ground secured a site at the Morris Moor development, but plans were put on hold at the start of the year.

While construction work has now recommenced with the aim of opening the venue in the middle of 2021, the team has come up with a summery stopgap solution: a pop-up that will operate in the gardens and a currently unused building next to their building site until early March.

Stomping Ground co-founder Justin Joiner said in a media release: “It’s obviously been a tough year and we would have loved to open the new Morris Moor Brewery & Beer Hall sooner, but we’re finishing the year optimistic for what 2021 will bring and we’re really excited about opening the popup and meeting the local community. Punters will be able to watch our permanent venue literally take shape before their eyes as they enjoy a beer in the sunshine this summer.”

As well as offering a wide range of the brewery's beers, they're serving "Smashees" – a "Smash-up" of their Passionfruit Smash and Tequila Tromba, with guests able to enjoy table tennis, a sport on giant TVs, dog-friendly outdoor areas plus games and a simple food menu, with plans for a BBQ on weekends.

‘We’ve borrowed a massive charcoal grill from our mates at Three Blue Ducks so will shortly be cranking that up on the weekends,” Justin says.

Articles by Will
Castlemaine A new brewing company that takes its name from its home town of Castlemaine has started up in Victoria. It brings a decidedly old school approach to its beers, so we decided to find out why. read on 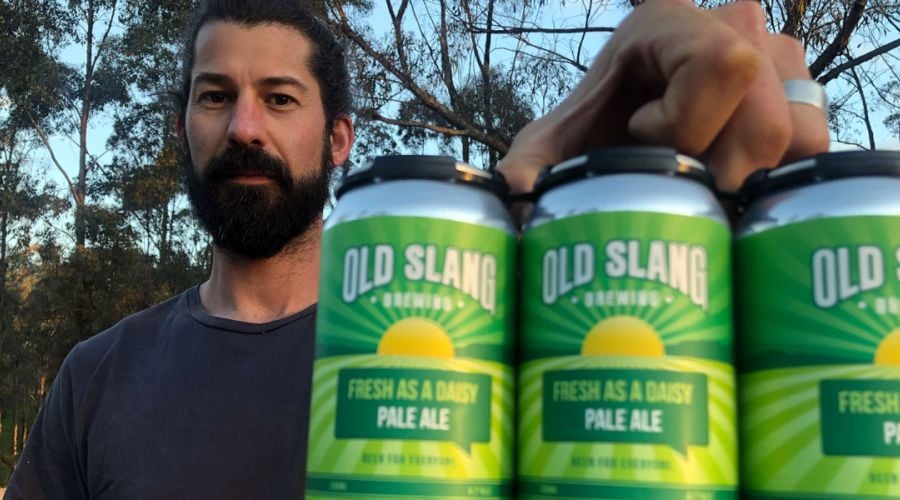