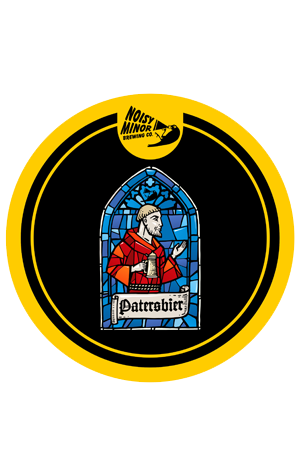 It's hard to come across a Belgian style beer bearing the name "Pater" – especially one with a stained glass window for its label – without thinking of possibly the most inappropriate label to appear on a beer: that for Beer Here's delicious Malus Pater. This one is far more tastefully decorated with the brewer's notes telling us: "Patersbier means 'Father’s Beer' - the beer the monks drink at their table after a long day brewing dubbels and tripels. It is lighter in alcohol – a Belgian session beer, if you like – but harnesses all the yeasty complexities of its bigger brothers. Most monasteries choose not to release these beers commercially, making them amongst the rarest beers in the world. Patersbier is not a beer style per se – the beers themselves vary widely between breweries.

"Now let’s be clear, we’re certainly no monks (although we were educated by them), and our humble brewery is no Trappist Monastery. But after weeks of silent prayer and chastity, we came up with our interpretation of a Patersbier. Pale blonde colour, with yeast-derived aromas of pear, brioche and spice, a soft Pilsener-y maltiness and a dry, refreshing finish."