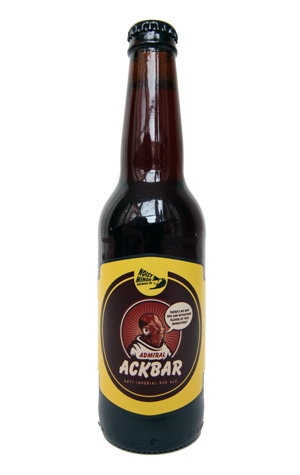 Sibling breweries Fortitude and Noisy Minor have been one of the standout successes of the beer revolution in South East Queensland. Perhaps most notably, they've seen multiple beers score highly in the past couple of Local Taphouse Hottest 100 polls; this year, they had three beers in the top 14, a remarkable achievement for a young brewery whose beers were, last year, only regularly available in Queensland and New South Wales. But anyone who's tried their full range would readily accept it's one of the best and most consistent in the country.

The third of the beers to make the top 14 – in 14th – was perhaps the most eye-catching of the three. It was the Admiral Ackbar, an "anti-imperial" red ale that was only available as an occasional draught-only release, unlike the core beers Anzus IPA and Fortitude Golden that also charted. But, again, anyone surprised to see it there only needed to try a glass to acknowledge it was worthy of its place. And now it's been bottled by the Mt Tamborine crew to increase its availability.

Once out of the bottle, it's a ruby chestnut affair that showcases rich toffee, treacle and sweet, nutty malts, supported by some balancing citrusy hops. It's dangerously well judged, the 8.5 percent alcohol so well hidden you can't help wonder, like Admiral Ackbar himself, if it is indeed a trap.