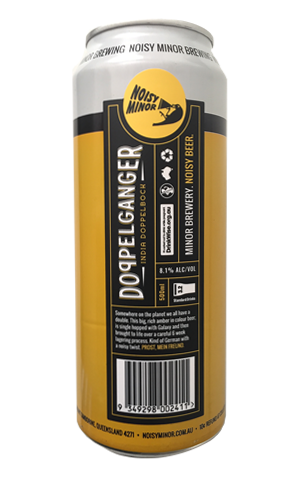 A massive lager. Who knew?!?

Well, plenty of people, of course, but as the lupulin shift carries palates further into bitterness and fruit juice territory, clean, deep malt styles are shown less favour. It’s a flavour game that’s ours to lose, which is a shame, but for now we have Doppelganger, which may or may not have a likeness out there trying to hunt it down and kill it.

Six weeks of lagering by the Noisy Minor crew presents initially as malt sweetness from the dark, ruby-coloured beer. "India" may be overplaying any assumed aggressive Galaxy hop influence, however what shines is the caramel jube-like malt character, the basis for a lengthy palate for the booze to rise through. Clean, precise and very likely to have drinkers seeing double, Doppelganger is a solid reminder of a classic German lager style.