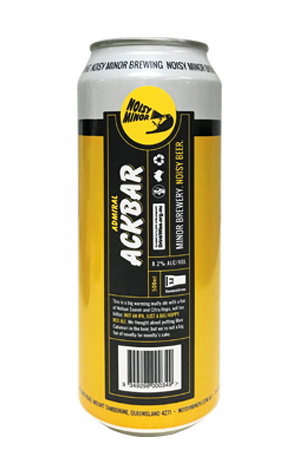 While Brisbanites have been dusting off their flannel shirts and beanies, preparing to endure the brief and fleeting Queensland winter, Mount Tamborine’s Noisy Minor have quietly released the 2019 run of Admiral Ackbar. The most notable of the Fortitude Brewing offshoot, Ackbar is a big, hoppy red ale that’s a stalwart in the South East Queensland beer scene and, again, does not disappoint.

With a big Citra hop-loaded front and a sweet, dry finish, Admiral Ackbar is an 8.2 percent ABV beer that drinks like a 5 percent beer that leaves you reaching for more, with the toffee and caramel coming to prominence as you make your way through the monster. A lingering boozy finish is the only indicator of its strength, adding a warming effect perfect for the month-long spell of cold that dominates this corner of the world each winter. It’s a beer to be enjoyed on a chilly night when you don’t have a lot else to do, especially as the 500ml cans contain 3.2 standard drinks.

More quaffable than it should be, and most assuredly a trap, Admiral Ackbar is a formidable force and deserves its place as a staple in its home state beer scene.

A "ridiculously small batch” was released to venues in Brisbane, the Gold Coast and the Sunshine Coast.