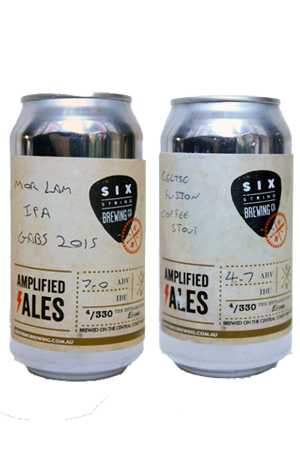 It's adjunct time at Six String on the Central Coast, with the two most recent limited release beers to leave the brewery packing more than water, hops, malt and yeast. One was their entry into this year's GABS festival, the other is a hook up with a local coffee roaster.

The GABS beer is the Mor Lam IPA, a beer that brings some of the flavours and aromas of Thailand to bear upon an IPA, namely kaffir lime, coriander and lemongrass. The result is an IPA that will fit snugly in the love-it-or-hate-it camp, given there will be some who don't want such spices in their beer. They'd be missing out, however, as the beer to which the spices have been added is an expertly constructed affair: a brilliantly clear copper drop with a full, fluffy head and lots of aromatics and flavours contained within a tight as package. The Thai elements sit alongside some fruity, citrusy hops in a beer that's smooth on the palate with a drying, perfume like herbaceous bitterness. One can imagine Two Birds Taco fans going nuts for it.

The Celtic Fusion is a coffee stout featuring 15kg of locally roasted coffee that spent 36 hours cold steeping in the beer. As you can imagine, the coffee is to the fore, coming with hints of mint and also a charred steak meatiness. Add in toasted nuts, caramel sweetness, twiggy hops and a dry, roasty finish and you've got a dark beer with more bite than you might expect from a sub-5 percent brew. It's been pouring on the hand pump at the brewery too.

NB: The beer is draught only or growlers from the brewery – the cans pictured were samples. And the stockists listed ordered one or both of the beers.

The Prince of Wales Hotel - Merewether