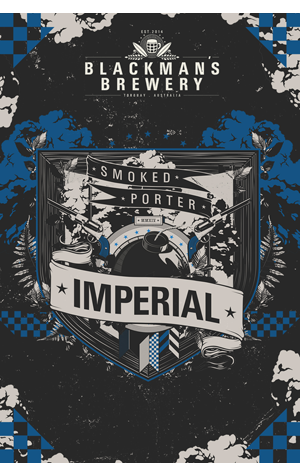 One imagines that, over time, Blackman's Brewery will become as well known for its lagers as any other beer. Not only are they one of very few small Aussie breweries that genuinely likes to make them but brewer Renn Blackman's history, including time at Camden Town Brewery, means he brews them damn well, as anyone who's become acquainted with his (now bottled too) Unfiltered Lager will attest. But, having concocted a few for Good Beer Week, when it came to choosing a beer to mark the Torquay brewpub's first birthday they looked elsewhere.

They opted instead to beef up their Arthur Smoked Porter to imperial levels, launching it at their birthday party on August 1 and simultaneously tapping a keg at Bendigo On The Hop. We remembered just in time to grab a sample at the latter and can report back that Renn can do big black beers as well as he does delicate pale ones. The smokiness is kept to a supporting role in what's a surprising lean for 9 percent beer, one that's rich in chocolate and coffee yet finishing dry enough to go back for more. Other than a tiny number of kegs, they've bottled 150 750ml bottles you can order direct from the brewery.