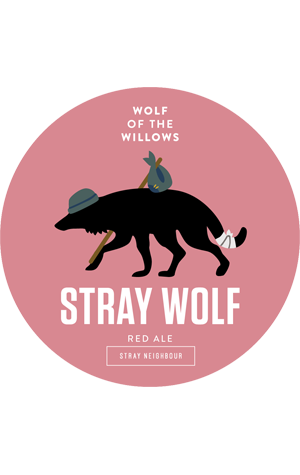 Stray Wolf is a coming together of two of the newer operations doing good things for beer in Melbourne. On the one hand you've got Wolf of the Willows, the former brewing gypsies who are now housemates at Bad Shepherd. On the other is Stray Neighbour, the top notch Preston restaurant with a fine line in craft beer on tap. They're not only doing good things for beer either; with this collaboration they're doing good things with beer as a percentage of profits is going to a couple of dog shelters. Well, Stray Neighbour does have dogs' heads (not real ones) on its tap handles...

As for the beer itself, it's a red ale described as having "subtle aromas of stone fruit ... balanced by toasted malt characteristics. A moderate malty sweetness is followed by caramel and biscuit malt flavours." The brewers reckon a balance between "malt richness and hop bitterness [create] an easy drinking and approachable classic American Red Ale."

On tap in Victoria and Queensland