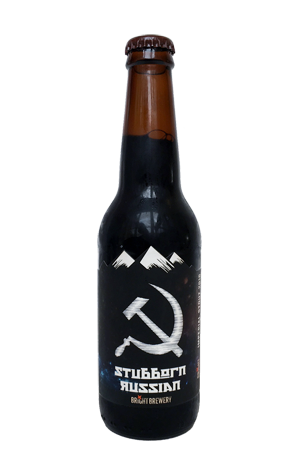 We're a little bit late in posting the latest version of Bright Brewery's annual Russian imperial stout, which made it out not long after the end of Winter. Thankfully, the weather gods have decided to extend imperial stout drinking time by a few more weeks.

The beer has been around for a few years now, typically changing a little for each release; past variations have included one blended with an old stock ale and another that was sent rocketing to 16 percent ABV. For 2016, it's been restrained back to a comparatively sessionable 10 percent ABV. It's also one of the first beers the new brewing team of Rich and Tom has been let loose upon to do as they will, which led them to local Bright roaster Sixpence Coffee, who supplied some single origin Ethiopian Guji cold-drip coffee for the brew.

It pours black as the night, with a thin, dark brown head and low carbonation that gives it an oily mouthfeel. There's the dark chocolate and coffee one would expect in a beer that might be lower in alcohol than its predecessor but lets you know it's boozy regardless – just in case you really did think imperial stouts came in "sessionable".