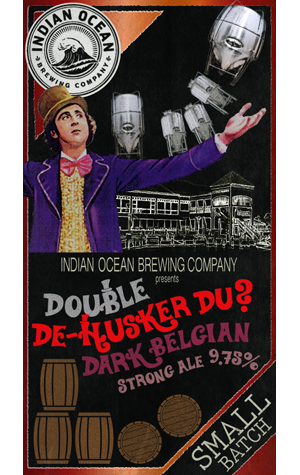 Double De-Husker Du is a Cab Merlot barrel-aged, dark Belgian strong ale. Where to start? Big sweet plum, raisin and toffee. This concoction was brewed alongside its younger counterpart to showcase the same malted ingredients, but treated differently post mash.

We used Belgian candi sugar and a traditional Belgian Abbey yeast strain and, once in barrel, the strong ale was re-fermented with a red wine yeast strain and orange blossom honey. Very limited volumes, roughly two barrels worth will be released this year, with the remainder to be cellared until 2017.