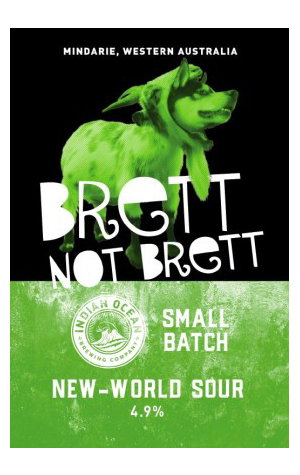 Brett Not Brett has become a well regarded small batch release for the brewing team at WA's Indian Ocean. Despite featuring in The Crafty Pint Best New WA Beers of 2017, for some reason, we hadn’t actually added it to the Indi brewery page on the site. So, with a new iteration of this small batch release now pouring from the Mindarie brewery, it felt like a good time to set that record straight.

Brett Not Brett’s name was spawned from the unique Saccharonmyces Bruxellenis Trois yeast used in the beer, which creates Brettanomyces like characters without any need to sterilise the brewery afterwards; in other words, it's Brett not Brett. This influence crates a refreshing acidity in place of bitterness, as well as pineapple and melon characters and a moreishly dry finish. The “New World” element comes both from the yeast strain and the Vic Secret hops that head brewer Jackson Purser credits with giving the beer additional lychee aromas.