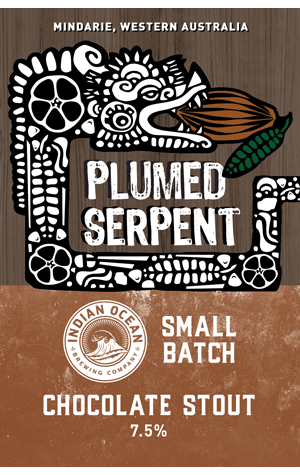 That’s a fair bit of promise to deliver on but the respected venue manager who served that comment amid other praise while pouring the beer may have captured the very essence of Plumed Serpent. While it's a far smaller beer – 7.5 percent ABV in stature – its cohesive balance and execution have created a beer with poise reminiscent of a 12 percent ABV Omnipollo-esque stout.

Coffee, milk and dark chocolate, marshmallow, fig, macadamia nut, vanilla and more besides smoothly swirl through a silky, lactose infused body. The coffee characters were delivered post-ferment via Australian and Papua Guinean single original beans from Swan Valley roaster Yahava, with a final addition of dusty cocoa contributing to a beer with a dry, finishing bitterness and hints of sweetness.

Available from Indian Ocean draught or in CANimals

And at select WA venues