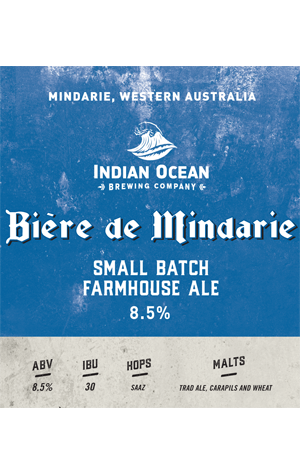 Indi’s head brewer Jackson Purser has had a growing – pardon the pun – fascination with yeast since last year’s release of the widely celebrated and much enjoyed Brett Not Brett, a beer that used a clean Saccharomyces yeast to deliver funky characters. For 2018’s GABS entry, he and assistant brewer Brody Watts have continued this exploration, this time bringing Belgian brewing pastures into their marina home on Perth’s northern beaches.

Wheat and biscuity malt is evident, however it’s the sour tang that draws your initial attention. Citrus with some light banana and peppery spice shine as the 8.5 percent ABV tractors quietly through what is, in essence, a high alcohol kettle soured saison, something that will surely sate Mindarie’s workers.

Available on tap & in CANimals from the brewery and at select WA venues and growler filling retailers.