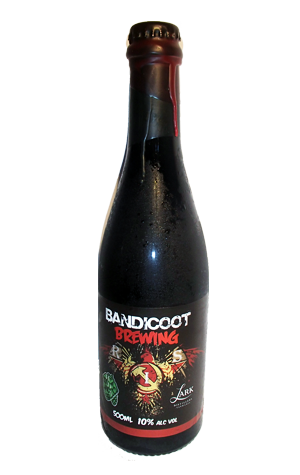 If you're after an indicator of where the Australian beer industry is, this should do the trick. Southern Courage is a Lark Distillery whisky barrel aged Russian imperial stout from Echuca, the port town where, after more than generation after generation without a brewery to call its own, Bandicoot now operates. It's the baby of successful homebrewer Tracey Green and husband Bruce and this is their boldest statement yet.

The first batch of the beer spent six months in Lark barrels before being blended with a fresh, unoaked batch. And the result of this collaboration with Hopdealz Australia has been worth the effort. The whisky character is most noticeable on the nose – juicy and enticing – and the blending and ageing has been judged to the point that the beer – rich, thick, dark and creamy – is luscious without any boozy heat to distract from the experience. Sure, late summer might not be the time you'd usually pick an imperial stout off the shelf, but if you're in the mood, Southern Courage will make you glad you did.

If you're reading this on the day we posted the write up, and you're in Melbourne, you can catch the Bandicoots at Carwyn Cellars for Southern Courage's launch.