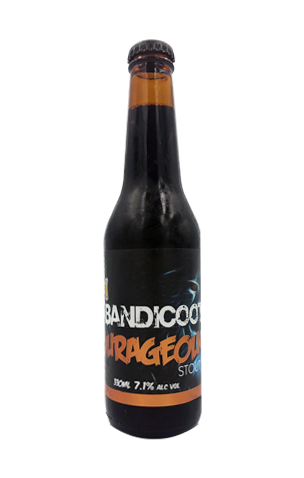 The Bandicoot beer that's arguably got more beer geeks hot under the collar than any other is their Lark Distillery barrel-aged Southern Courage Russian imperial stout. With this seasonal, they're playing in stout territory again but with Courageous somewhat smaller than that luscious beast of a beer and one that features cocoa and coconut.

One can only presume that a hefty amount of roasted barley features in the grain bill as there's an intense roast bitterness and high couverture dark chocolate dominating on the nose and a satin like smoothness too. As for the adjuncts, don't go in expecting anything lamington-esque from the cocoa and coconut; more than anything, the latter adds a distinct creaminess without intruding. What you end up with is a beer reminiscent of old school English imperial stouts, with dense dark fruits shot through its midst.