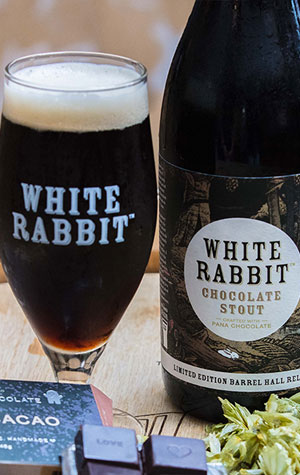 It wasn't too long ago that the only beers White Rabbit put into bottles was its core range. Increasingly, however, the sort of beers that were once only found pouring at the cellar door or special events and festivals are being packaged, albeit still only available from the brewery or direct from Lion's online store. Following in the footsteps of a few sours comes another beer with an eye on Easter: the Chocolate Stout created with Pana Chocolate.

Rather than simply add chocolate to the beer, the brewers made use of the barrels filling their redbrick home. The base beer spent time in oak (with brandy soaked oak staves inside), and a portion was then caramelised with chocolate and blended back. As with White Rabbit's barrel aged Red, the various elements make themselves known subtly. There are background flashes of juicy booze from the brandy; there's a silken creaminess to this jet black beer too. But most of all it's about the chocolate and dark cacao characters, with little in the way of sharp roasted characters or bitterness to detract from a dessert like experience.