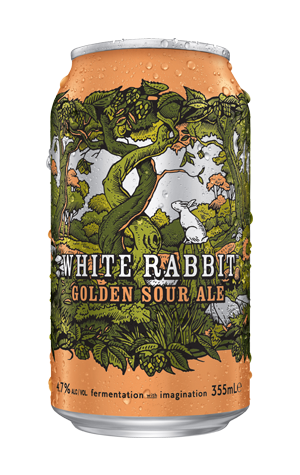 Not long after Boatrocker opened the doors to their Barrel Room, the first of its kind in Australia, White Rabbit opened theirs in Geelong. Yet, while the former's barrel-aged delights have become some of the most talked about and sought after of their ilk on these shores, those from the latter haven't created as much noise. This despite the fact there have been some quality Flanders red style beers, complex Berliner Weisse and so on released over the years.

Maybe it's down to the fact White Rabbit is part of Lion: is less attention focused on such beers within a global giant? Do the drinkers of such beers more heavily favour independent producers? Whatever the answer, one assumes they'll be hoping to reach more people – both existing sour beer fans and those who've yet to encounter such a thing with this: the Golden Sour Ale in 355ml cans.

Let's start with the name, shall we, as in this era of slapping as many prefixes on your beer name as possible, there's surely an argument for this being the Dry-Hopped Golden Sour Ale. Your first impression won't be one of funk or acid but of late addition lemon citrus and sherbet drop hops. It's more on the palate that you'll find the golden sour doing its thing, where there's both a viscosity and a clip of refreshing acidity. More likely to bring to mind sour boiled lollies than a bracing Belgian sour, it's a reminder of the experimentation that's been going on for years in the warehouse most visitors to Geelong walk past to get to the more straightforward offerings from Little Creatures next door.