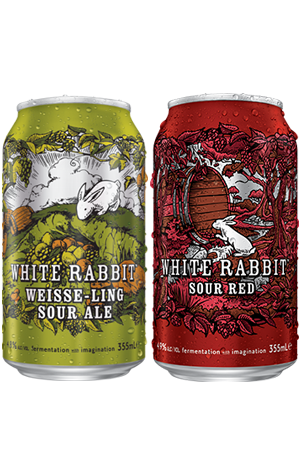 I’m sure it would have been easy for Lion to quietly shelve the wilder elements of their White Rabbit brand and stick to their popular Dark and White ales. One would think multinational breweries that value consistency and quality over all else would be terrified of having Brettanomyces-soaked barrels bubbling away in their midst. If nothing else, it’s testament to how far beer has come in Australia that White Rabbit now release their second and third mixed fermentation, barrel-aged beers in cans – this year alone.

Weisse-Ling Sour Ale, as the name suggests, is a Berliner Weisse re-fermented in barrel on riesling skins. It pours a light straw colour with a tinge of orange/pink and a quickly dissipating head. White grape aromas come first with citrus and floral back notes. It’s on the palate this beer really shines, however. There’s an immediate vanilla-oak creaminess that’s cut through with an orange juice like tartness, and there’s just the slightest hint of funky vinous tannins to finish. It’s genuinely lovely and I’m not at all unhappy I have another three cans awaiting my attention.

This isn't the first time White Rabbit have released a Sour Red but it is the first time you've been able to get hold of one encased in aluminium. Previous iterations of their red have been blended with their flagship Dark Ale and, although not explicitly stated on the can, I’d be willing to bet that’s continued here. The deep ruby red beer first presented me with hints of the toffee apple lollies I used to destroy my dental enamel with at the school tuckshop. Continuing the tuckshop theme, on the palate I get Cherry Ripe chocolate and Vanilla Coke, before it closes out with just a hint of Bretty funk, something never served up at the tuckshop.