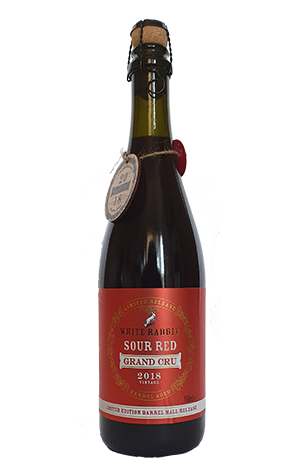 Less than a year after moving the brewery from Healesville to Geelong, the brewers at White Rabbit released Sour Red. It was the kind of beer that might have shocked a few beer nerds who expected the Lion-owned brewery to focus on better known styles once the new operation was up and running. This site's founder was among them, giving the beer highly dubious honour of being The Crafty Pint’s lengthiest beer write up at the time (and likely still). A few years on and the brewery's remained committed to barrel-ageing with Sour Red joined by the more limited Sour Red Grand Cru.

Grand Cru sees naturally fermented shiraz grapes from Provenance Wines added to Sour Red barrels but, unlike the regular release which uses a blend of Sour Red that are different ages, Grand Cru is an expression of the barrel stock from the most recent year. The 2018 expression (released towards the end of 2019), comes with a deep and vibrant red colour and a flavour profile that’s picked up a lot of vinous notes from Provenance. It contributes a big, woody and tannin quality alongside the notes of cherry and raisins plus a rich juiciness and clawingly tart finish, though the sourness is more towards mild end of the spectrum.