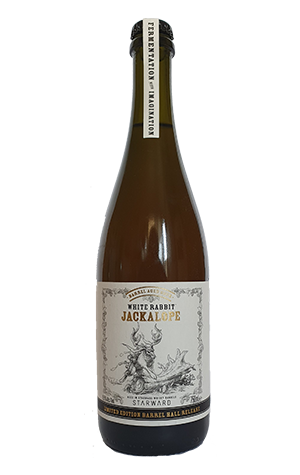 The fearsome Jackalope, a rabbit with the horns of an antelope – not to be confused with a horse with the head of a rabbit and the body of a rabbit – are said to roam North America and would strike fear in the hearts of travellers who'd been on the road a little too long. Head to the White Rabbit barrel hall in Geelong and you’ll find a different Jackalope roaming, one with the base of a wheat beer and a top of whisky from months in Starward barrels.

The beer was first brewed for GABS back in 2016 and has since been re-released in 750ml bottles and, though the Jackalope is easiest to find at the barrel hall, has wandered a little wider too. Aged in Starward’s Nova barrels, the bright straw-coloured beer has hearty notes of vanilla and whisky and, despite being a particularly full-bodied 5.5 percent ABV beer, Jackalope's tart edge makes it a summery barrel-aged whisky beer.