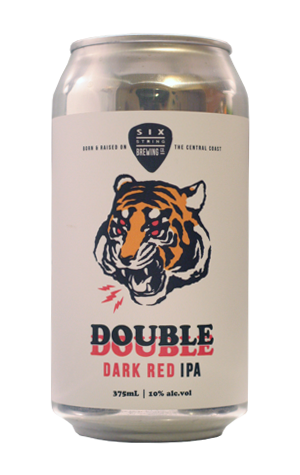 When Six String launched back in 2013, the beer that won them the most beer geek cred was their punchy Dark Red IPA, a style few made at the time with any regularity and one the Central Coasters effectively made their own. Fast forward to IPA Day 2017 and the Six String brewers decided to take their beloved red IPA, run it through the amplifier and crank the dial all the way up to ten.

The Double Dark Red IPA has double the malt and triple the hops of the original, making this ten percent ABV and 100 IBU beer an undeniable step (or two) up from its predecessor. And yet, perhaps a better word to describe it is simply decadent: the aroma comes across as resinous and on the palate it feels thick and viscous, tasting rich and sweet like a caramel booze ooze. It’s easy to imagine someone new to beers from outside the common or garden realm being presented with a glass of DDRIPA and being taken aback at such rampant flavours, but those already on the good beer train ought not to find it a difficult gap to cover.

As a limited release they'd normally have packaged this in 500ml cans but, considering what’s contained within, they reckoned 375ml was probably enough in one go. The jury’s out on that, which probably means you get to be the judge.