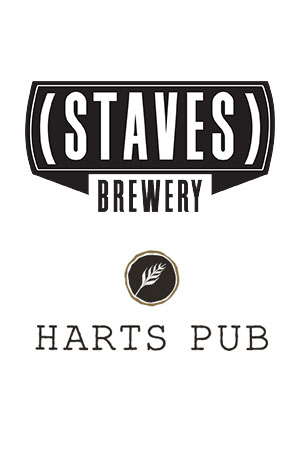 Staves Brewery and Harts Pub have a kind of natural affinity. At heart, both are pretty traditional, English-style venues that don't seek to be too flamboyant, instead just focusing on serving up good beer and a cosy, convivial ambience; the rest is up to you. This kind of mutual thinking perhaps explains why Harts was the first – and so far only – place to have had a Staves showcase. And it’s probably part of the reason why the two ended up teaming up on a beer.

It began, as these things must, with Staves owner Steve and head brewer Liam sitting down with the Harts team to figure out what style of beer to make. They got busy dissecting malt and hops and, at the behest of the publicans, opted for an IPA. On brew day Liam was joined in the brewery by six of the Harts team (which, if you know the layout of Staves, would have proven quite the squeeze) to go through a shortlist of the hops that would feature from and centre in the beer. After a sensory workout they settled on their preferred hop varieties; Vic Secret, which Liam hadn't used before; Citra, which – for better or worse – reminded one Harts member of the smell of his gym bag; Centennial, which reminded Liam of a lemon scented gum tree near his childhood home. The beer was duly brewed and the non-brewers in the group ended the day a little more learned. Not wanting to eschew their duty, the Harts team returned to Staves when it was time for dry hopping, thus ensuring they got the fully immersive collaborative experience. And now the final and arguably best part of the process is here: the launch.