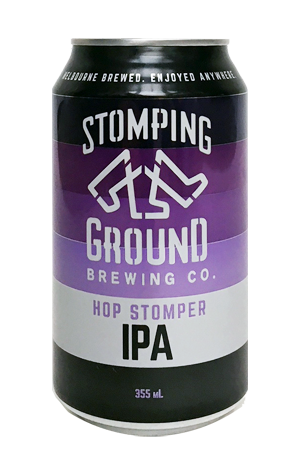 If there's a downside to the Good Beer Week/GABS marathon, particularly if you're involved in hosting events, appearing on panels and taking tours, it's that it can overwhelm pretty much everything else, both in the lead up and for its duration. And that's been the case here, with Hop Stomper appearing in cans from Stomping Ground just before the festival, a sample making its way to Crafty Towers on the night of the IBA's Independence Seal launch and sampling only taking place a fortnight later...

Still, given it's still just a few weeks old, the hops are still shining and there should still be cans around for those eager to sample the latest wider release from the Collingwood brewpub. Those likely to be eager will be those who enjoy getting their hands on IPAs at the leaner, paler end of the style spectrum. Because here you'll find such lean dryness, with hop characters dominated by a certain pithiness, by grapefruit and orange zest, little in the way of sweetness and a pretty potent bitterness.