Beer Wolf Of The Willows The Woodsman Amber Ale 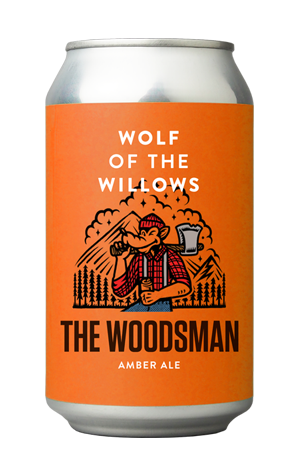 In this day and age, when most beers are supercharged versions of what they would have been in the past (and by past we mean any time up to the last decade), it can be easy to forget how things used to be. How beers like amber ales used to be, as the name would suggest, predominantly about the malts that lend them their colour and, thus, name. For the most part, led by the craft beer revolution in the States, the supercharging has come by the way of hops – more and more of them – to the point where we tipped Wolf Of the Willows' winter seasonal into a glass and fully expected to be hit by a wall of hop aromas first. But no...

Eschewing the American amber style that's come to prominence, here's a return to a more genteel form of amber. Admittedly, it comes within a can featuring a wolf lugging a giant axe but, as was proven in the 1970s, many lumberjacks enjoy buttered scones for tea, pressing wild flowers and occasionally dressing in women's clothes when hanging out in bars, so genteel makes sense. Toasted biscuits, a hit of chocolate, some toffee and a finish that's dry more than bitter and keeps the sweetness in check, just like the old days; you know, 2012.

You can also find the beer here